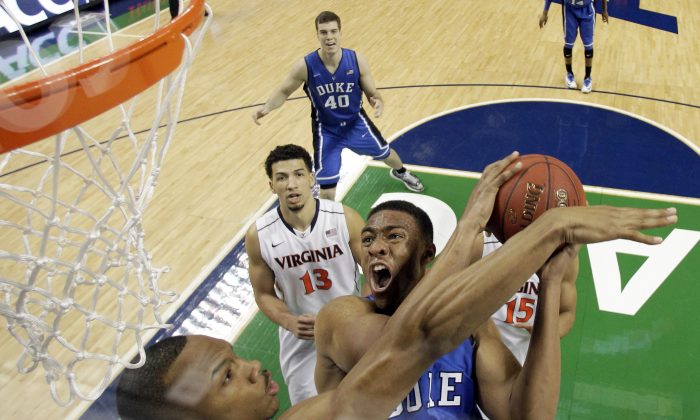 Duke's Jabari Parker (1) tries to shoot over Virginia's Darion Atkins during the first half of an NCAA college basketball game in the championship of the Atlantic Coast Conference tournament on Sunday, March 16, ahead of the selections for the NCAA tournament on Sunday night. (AP Photo/Bob Leverone)
College Sports

March Madness is officially upon us as today is selection Sunday.

So where can you get a printable bracket for the NCAA tournament?

The best place is probably the NCAA’s website (pdf).

The official bracket will be announced at 6 p.m. ET tonight on CBS.

The league’s bracket will be updated then to include the selections.

The first four games take place on March 18 and 19.

Final rounds begin with the Sweet Sixteen on March 27 and March 28. The Elite Eight is March 29 and March 30.

The Final Four is on Paril 5 and the biggest game of them all is on April 7.