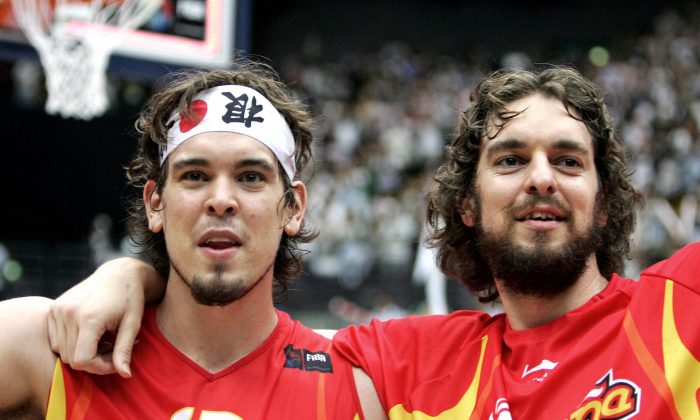 Spain's Pau Gasol (R) and his younger brother Marc Gasol hold each other after after the final of the World Basketball Championship, in Saitama, 03 September 2006. (AFP/Getty Images)
NBA

Marc Gasol is one of the if not the best center in the NBA, and will be on a shortlist of top free agents this summer.

Part of his evolution as a player is attributed to developing in both the United States and Europe, leading to him becoming one of the most dominant big men in the league while also playing within a team system.

Gasol, 30, revealed that he has big plans, too, when he eventually retires from professional basketball.

“Me and my wife (Cristina), we could live in Yukon Canada if needed be – trust me,” Marc told USA Today in a recent interview. “We can get used to anything.

“Just like it was a big shock for us as a family to move from (Spain) to Memphis, we can make it anywhere. Anywhere in the world where we can live – Thailand, Japan. I even talk to Cristina about it, like when I’m done playing in the NBA, I would like to travel the world and live in different cities just to know them, and learn a different culture, learn different languages.”

Gasol spent some time in Japan in 2006 when he was part of the Spanish team at the 2006 FIBA World Championship. Spain won the gold medal at the competition.

Gasol also traveled for similar competitions including the Olympics, and when he played professionally in Europe, to China, Poland, Lithuania, the United Kingdom, and Slovenia, among other places.

“I like the Patagonia in Argentina. Japan is a place that I would love to do for a good six months. China, I’ve been there many times, and I don’t know if I could make it in China, but I think I would too honestly,” he added.

“I’m more on the country side than big cities. London. I would love to live in Australia.”