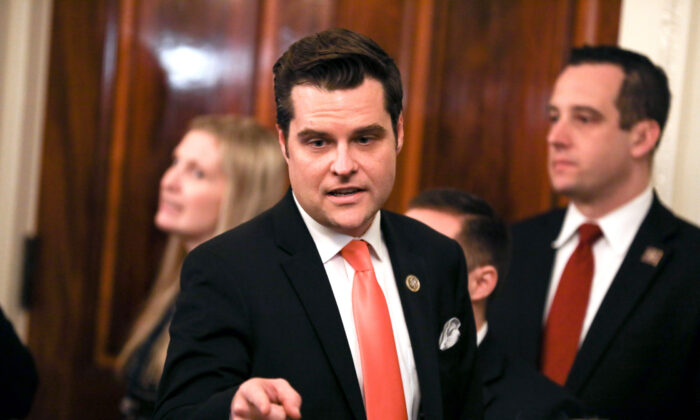 Masooma Haq
Masooma Haq began reporting for The Epoch Times from Pakistan in 2008. She currently covers a variety of topics including U.S. government, culture, and entertainment.
View profile
Follow
and Stefania Cox

Until there is full transparency in the case, the actions by the Federal Bureau of Investigation (FBI) just go to corroborate what whistleblowers recently told the House Judiciary Committee: that Trump and his allies are to be maligned, and the Biden business dealings are to be kept quiet, Gaetz told NTD host Stefania Cox on Aug. 9.

Recently, some whistleblowers stepped forward to the House Judiciary Committee, revealing two points: “if there’s anything negative about Trump or his allies, that gets accelerated, leaked, and used for political purposes. Meanwhile, the FBI and DOJ are protecting Hunter Biden by downgrading information that shows the compromise of the first family driven by the Chinese Communist Party (CCP),” Gaetz said.

Ranking Member on the Senate Judiciary Committee Sen. Chuck Grassley (R-Iowa) has called on FBI Director Christopher A. Wray for complete transparency on the raid of Trump’s home.

“If the FBI isn’t extraordinarily transparent about its justification for yesterday’s actions and committed to rooting out political bias that has infected their most sensitive investigations, they will have sealed their own fate. The FBI’s mission and the many patriotic agents who work hard to carry it out will be forever overshadowed by the distrust the bureau has sown,” Grassley said in an Aug. 9 press statement.

Gaetz said targeting political opponents is what happens in socialist countries like Venezuela, which the United States is starting to resemble with rampant inflation and crime. The United States is now in an era where federal law enforcement agencies, including the Department of Justice (DOJ) and the Federal Bureau of Investigation (FBI), like in Venezuela are becoming the “enforcement wing of the Democratic Party” used to take down political opponents.

The DOJ and White House did not immediately respond to The Epoch Times’ request for comment.

There is no legal reason to have 30 FBI agents raid a former president’s home over archives, Gaetz said, because that is normally resolved amicably through lawyers and subpoenas.

“The notion that this was like some clerical matter for the archives is patently ludicrous. This was a political message, a political symbol, a political show of force from the Biden administration, because they have a legislative agenda that is unpopular, and they are facing an outcome in the midterms that will undeniably take power from them,” Gaetz added.

A former Hilary Clinton lawyer, Mark Elias revealed in an Aug. 8 Twitter post his view of what the FBI raid on Trump’s Florida could accomplish.

“The media is missing the really, really big reason why the raid today is a potential blockbuster in American politics,” he said.

Elias pointed to the 18 U.S. Code 2071 – Concealment, removal, or mutilation generally, which details what happens if a person is shown to try to destroy federal documents. Elias highlighted this line from the code: “and shall forfeit his office and be disqualified from holding any office under the United States,” which is what Trump and his allies say the political left have been trying to achieve for many years already.

“It does show that the goal of the political left isn’t to win free and fair elections, where people can choose the candidate of their choice. Their goal is to bar people from even being a choice,” Gaetz said.

The Florida Republican added that Elias “is the same Clinton political attorney who was very involved in peddling the Russia hoax, which was really the first effort by the FBI and DOJ to smear and destabilize Donald Trump unfairly and without due process and without following their own rules.”

Gaetz said the means and methods used by the FBI at Mar-a-Lago were intentionally chosen to be a “show of force.”

“And I think people right now, all over the country, are seeing it as an extreme and very dangerous exercise of politics, not legitimate law enforcement activity,” he said.

If the GOP gains control of the House after the 2022 mid-term elections, Gaetz said Republicans will conduct oversight and if needed, hold those at the DOJ and FBI accountable for any illegitimate actions against Trump.

They have already been escalating this abuse of power, starting with targeting those who were in Trump’s administration, Gaetz noted.

Gaetz said he sees this effort to malign Trump and his allies ultimately backfiring on the Democrats.

“I think what happens next is a rallying around Trump, a likely Trump announcement for President in 2024, and an invigorated political movement ready to support him.”