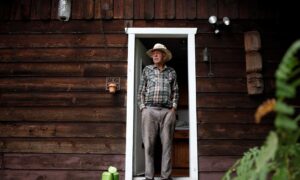 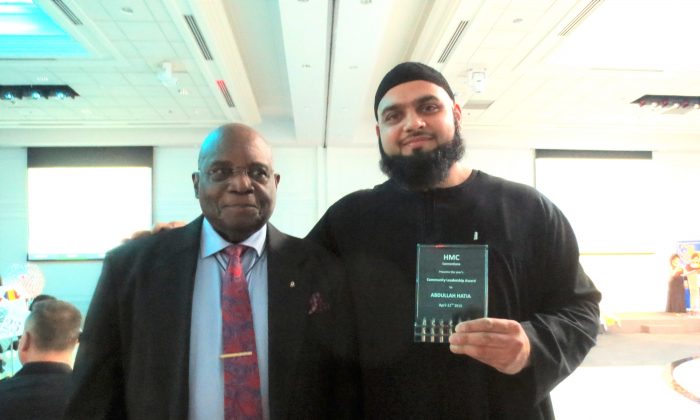 Mapping the Immigrant Journey: A Celebration of Multiculturalism and Diversity

The event, titled Mapping the Immigrant Journey, was a celebration of multiculturalism and diversity showing the commitment made by HMC to provide various programs and services to newcomers, regardless of race or ethnic origin.

The evening included a multicultural fundraising dinner and presentation of the annual Community Leadership Award, the Recognition Award for Youth (R.A.Y.), and a special recognition to past president Trivi Mehendale, who served on the board for over 15 years.

This year for the first time, the Romanian community was invited to showcase its culture and traditions.

At the entrance guests were welcomed with bread and salt, a Romanian custom. The guests also received a small handmade sachet filled with lavender and basil, an integral combination that in Romanian tradition signifies purity, love, happiness, and storytelling.

This year, the award went to Abdullah Hatia for his outstanding leadership on initiating the Halton GAR Alliance, an alliance of multiple religious and social organizations whose purpose is to help Syrian refugees after they arrive in Canada.

The R.A.Y. award was established 10 years ago to honour the lifetime work of the late Sergeant Ray Hendry and recognizes high school students who demonstrate leadership in areas such as human rights, diversity, culture, social justice, community development, anti-discrimination, and equity.

Vishal Vijay, the recipient of this years R.A.Y. award, is the founder of a non-profit organization called EveryChildNow, initiated after a trip to India in 2012 where he got exposed for the first time to extreme poverty and was deeply touched by the injustice he witnessed. His organization advocates children’s rights, and particularly works with children helping other young children.

Upon receiving award, not just for himself but for his entire organization, Vijay said, “I believe this award is about recognizing the efforts of youth to care about other kids. And this shows that our generation truly is able to change everything and is truly able to have an impact. For me it is just complete happiness.”

As a special recognition, the board expressed appreciation for past president Trivi Mehendale and acknowledged his 15 years of contributions, dedication, and commitment to helping newcomers, refugees, and immigrants while serving on the HMC board in a variety of roles.

The dancers from ARTA Hamilton entertained guests with a traditional dance from Maramures County in Romania characterized by the rhythmic clatter of small steps, punctuated here and there with stronger beats.

Rooted in the distant past, the dances represent the artistic collective creation of the people, mirroring concepts about the universe and life.

A puppet show put on by Libelula Arts and Entertainment and coordinated by Dr Emilia Nechita was fun, educational, unique, and entertaining.

Violinist Ana-Lavinia Vlad of Waterloo played “Ballad for Violin and Orchestra,” a piece full of poetry, serene melancholy, and nostalgia. It is one of the best works of Ciprian Porumbescu, a famous Romanian composer from last century.

Valeriu Chitac, an artist and professional accordion player, played some well-known songs and invited the audience to dance and have fun.

HMC board president Ross Bragdon, raised in Montreal in a trilingual family, embraces multiculturalism in his daily life, be it at home or while serving in different capacities. His passion for diversity shines through in his volunteer work, which is an opportunity for him the get involved in what he really enjoys doing: fostering multiculturalism. He thinks that the more languages a person learns the more one learns about other cultures and that helps people be more tolerant and appreciate each other more.

Bragdon said of the event: “Wonderful night. The Romanian community really came out. I liked the traditional dances and puppet show, very interesting, very unique. What’s great about this position is that you learn about culture and people.”

Hon. Mitzie Hunter, Ontario’s Associate Minister of Finance (Ontario Retirement Pension Plan), is well known in the Greater Toronto Area both for her work in the government and in her volunteering capacity. Hunter is MPP for Scarborough-Guildwood.

“It’s a wonderful diverse community and I have an opportunity to really make a difference in lives of people that live in my community and be that strong voice for them on Queens Park,” she said.

“In addition to all those roles I’m also the former ministry for multiculturalism for Ontario and I have had an opportunity to meet our diverse community right across the province. It is so wonderful to be here in Oakville and to see that Oakville is alive with culture. … [Tonight] we are featuring the Romanian community, the music, the dance the children, the play, the puppet show. It’s really wonderful to see the whole community come together to celebrate each and everyone’s culture.”

Allison talked about what motivated him to start HMC Connection: “Shortly after I arrived in Canada, I began to realise that citizens in this country were encouraged to participate in specific activities. I have been involved in volunteering my whole life. It is one of my family values, and you know I understood very quickly the opportunity that in the Canadian community where I lived there are opportunities to serve, to give back. In 1966 when I arrived, the government of the day was pushing the multiculturalism policy. I liked it. I came from England where they did not have a policy like this so when I came here and heard that the government was behind multiculturalism, and what it meant, I liked that and I wanted to be part of it,” he said.

“This is the sixth year that I’ve been asked to present the Bill Allison award and I think tonight is a symbol of the continuation of a great organization that provides a variety of services for newcomers that I think are very important.”

Louis Tsai, president of Halton Region Chinese Canadian Association and a director on the HMC board, said he considers himself fortunate to work with so many dedicated volunteers and for being able to give back to the local communities and help newcomers. One of the projects close to his heart is running fundraising events in support of the newest hospital built in Oakville.

Comments from Guests and Organizers

HMC executive director Kim Jenkinson said it was possibly the best event HMC ever held. “This was so full of energy and life, and it was wonderful to incorporate the kids, as we don’t see that very often. It was wonderful that the whole family could join in. It’s a beautiful event,” she said.

“We work very hard at increasing our relationships with the different ethnic communities and we happened to run into Gabriela Covaci, who was very instrumental in bringing this event together. She brought in the Romanian community and wanted to celebrate all the Romanian traditions and we are happy to support that. I’m really happy to learn about [the Romanian] culture.”

Doru Liciu, Consul General of the Romanian Consulate in Toronto, said the success of the gala was in large part thanks to the efforts of the Romanian community. “It was an extraordinary event. I was extremely impressed how these Rumanians managed to put Romania in the local mindset [through] this event.”

Covaci Gabriela, the Romanian coordinator, said that she didn’t do it alone and it was in fact an effort of the whole Romanian community. “People absolutely enjoyed the Romanian program. Everyone said that it was something special, and in the 12 years since attending this gala, have never seen such a show, which I think was beautiful,” she said.

Stephen Tanner, Chief of Police of Halton Regional Police Service, said: “It’s a fabulous event. It is wonderful to bring everyone together in the same place. No matter where you come from, Romania, or anywhere else, it’s a great place to come here and learn about the country and enjoy yourself.”

Nick Marinovich and his family thoroughly enjoyed the gala. “This event was fantastic. Romanian culture is very similar with Greek culture and I found many similarities with is great; it was a really great event, very happy to be here,” he said.

Valeriu Cercel thought the gala was wonderful. “This kind of events shows that we live in a great country and that Canada is a good mother for all those whom she adopts. It’s a fantastic change compared to the old community from more than 30 years ago, which was formed by the few who escaped immediately after the war or the second generation after them who have managed to flee the totalitarian regime across borders.”

According to the HMC board president and executive director, all proceeds from the event will support programs and services that facilitate and assist the settlement and integration of newcomers and refugees.