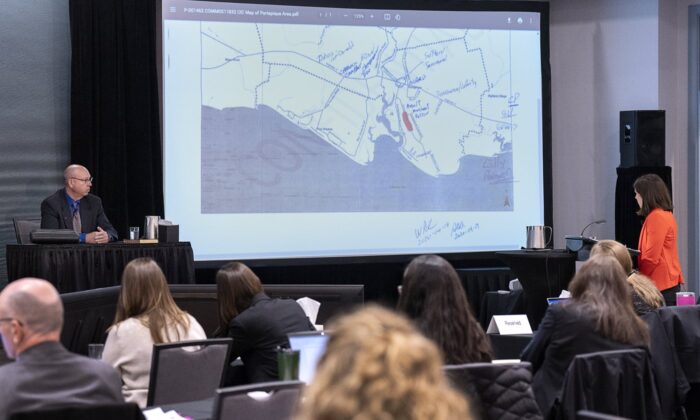 A report looking into a mapping program the RCMP had access to—but couldn’t open—during the 2020 mass shooting in Nova Scotia concludes it could have helped contain the killer’s rampage.

The study by Brian Corbett, an analyst with the inquiry, compares images of potential escape routes the RCMP viewed on Google Earth with what they could have seen through Pictometry—the trade name at the time for a program that uses high-resolution aerial images.

The inquiry has heard that after killing 13 people in Portapique, N.S., the gunman drove his replica police car along a narrow dirt road that led to three intersections that weren’t initially being watched.

RCMP supervisors have said they chose just to block the main road because the mapping images they used suggested to them the smaller routes weren’t passable by car.

However, Corbett found Pictometry “makes it more apparent that these are driveable roads,” while the Google Earth image is “unclear.”

After comparing maps of key escape routes, Corbett wrote, “Pictometry imagery would have given the RCMP a better understanding of the road networks in Portapique, thereby enhancing containment efforts.” At the time, the program was referred to as Pictometry, but it is now called Eagleview, the name of the U.S. parent company.

On April 18, 2020, at 10:32 p.m., as the first three Mounties advanced into the community on foot, Const. Vicki Colford was stationed at the main road’s intersection with the highway. A fifth RCMP officer went to the same location at 10:43 p.m.

The inquiry has said that sometime between 10:41 p.m. and 10:45 p.m., the killer slipped away onto Highway 2 and drove to an industrial park in Debert, N.S., before killing nine more people on April 19. According to inquiry documents, the killer escaped on a dirt road next to a blueberry field at the southern end of Portapique, reaching a U-shaped loop that connected with the highway east of where Colford was stationed.

The first officer to supervise the response, Staff Sgt. Brian Rehill, said in an interview with the inquiry last year the maps he saw showed “little gravel roads,” but he believed there was only one route out of the enclave by car. “That’s where I had all the containment set up,” he said.

Jen MacCallum, a supervisor at the RCMP’s Operational Communications Centre who worked with Rehill that night, said in an interview with the inquiry that Pictometry “was not working that night.”

“I was trying to get the passwords and everything to work, I could not,” she said, adding that a “millennial techie guy” in her office also couldn’t solve the issue.

Staff Sgt. Addie MacCallum, a district commander in Pictou County who assisted that night, also said he couldn’t open the Pictometry program in RCMP headquarters in Bible Hill, where several of the incident supervisors were stationed in the early hours.

“I start trying to go and find Pictometry, which each detachment’s supposed to have. I couldn’t find it, and (Staff Sgt.) Al Carroll (the local district commander at the time) didn’t know where it was …. We end up pulling a map off the wall. We put it on the table and start hand drawing on it,” he said.

Like Rehill, he said it seemed there was only one road in and out of Portapique.

Tara Miller, a lawyer participating in the inquiry on behalf of a victim’s family member, said in an interview last week that using the best programs in emergencies like the mass shooting should have been a normal process for incident commanders.

“Those were the critical moments to have been able to lock down Portapique and secure the containment,” Miller said of the initial period when the killer was still in the rural, wooded area.

“If they have these resources, they should be able to access them in the critical moments when they’re needed the most,” she said.

Allan Ladouceur, district manager with Pictometry Canada Corp., a subsidiary of Eagleview Technology, said in an interview Tuesday the RCMP have access to online training resources as part of the licence permitting them to use the web-based program.

Staff Sgt. Steve Halliday, another supervisor of the RCMP response, has testified that when he came on duty, “there was a belief” the main road was the only way out.

He testified that it was only at about 4 a.m. or 4:30 a.m. on April 19, when he saw a better map, that he came to realize smaller roads might have allowed the killer to escape “by all-terrain vehicle or whatever,” and he ordered the exits blocked by two Mounties.

Under cross-examination by Miller last week, Halliday said, “Pictometry certainly would have provided … a more clear view, I think.”

Rob Gordon, a criminology professor at Simon Fraser University, said in an interview last week that it’s important for incident commanders to be well-trained in how to use mapping technology.

He said without good mapping, the commanders “won’t be able to piece things together in a sensible way, unless they know the area really well.”