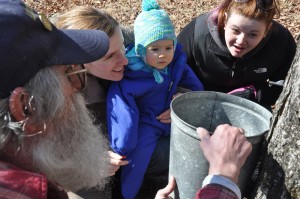 NEW YORK—March typically brings snow and plenty of maple syrup for the syrup producers around the state, as well as droves of visitors for Maple Weekend.

Maple Weekend is actually two weekends, this weekend and last weekend. In New York, a state, which produces about 20 percent of all the maple syrup in the United States—564,000 gallons—producers welcome hundreds of visitors to their land to see tree sap become maple syrup.

However, unusually warm weather this year has shifted the two-month tree-tapping season that generally starts in February or March to January through March.

“My husband and I have been doing this for 30 years and we’ve never seen anything like this,” said Jane Yancey, co-owner of Yancey’s Sugarbush, a dairy farm in Croghan, about six hours north of New York City. “Often we would not have made any syrup yet.

We very seldom make syrup before the 17th of March, and that’s an early year. This is extremely unusual.”

As Yancey was speaking, the last of this year’s sap, just extracted from the trees, was being boiled into syrup in the evaporator. Ideally, sap shouldn’t sit in the evaporator for more than a day.

Visitors this weekend may enjoy a horse-pulled wagon. The Yanceys are mulling over other activities.

Located almost five hours southwest, Greg Zimpfer, owner of Zimpfer’s Maple Products and co-chairman of Maple Weekend, explained why the weekends wouldn’t be changed next year. “This is really almost the perfect weekend for people to come out,” he said. “The weather is warm. It’s dry—it’s one of the few years you’re not trudging through the mud. And because I’m not trying to run an evaporator I actually have more time to visit with customers and show them what’s going on.”

Despite no syrup being made, “we”e still doing wagon rides to the woods,” said Zimpfer. “We can show them syrup being bottled, and cream and maple sugar candy being made.”

At Adirondack Gold Maple Farm, about an hour and a half north of Albany, Cheryl Kenyon and her husband will still be showing visitors this weekend how to tap trees for sap, gather sap, and boil it down. The last of their sap will be harvested this weekend.

The sap stopped flowing at Cartwright’s Maple Tree Inn, south of Rochester, which also draws visitors from as far away as Germany. On Maple Weekends in the past, said Rhonda Cartwright, daughter of the owner, more than 2,000 people visit their restaurant, which serves all-you-can-eat buckwheat pancakes and their own maple syrup. This weekend they will have tours of the land and demonstrate how to make maple syrup.