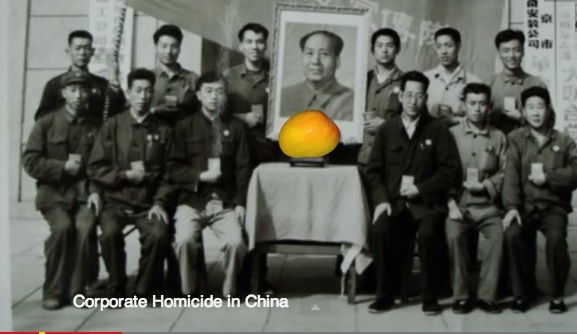 Here’s some fruits of wisdom: If you find yourself in a group of people worshipping a piece of fake fruit, you’re probably in a cult.

The Cultural Revolution (1966–1976) has been called a lot of things—a spasm of violence, for example. But I think this story captures a certain je ne sais quoi, a certain flavor of Mao’s personality cult that’s hard to replicate.

Just as the Cultural Revolution was really starting to heat up, in August 1968, the Pakistani foreign minister visited Beijing and gave Chairman Mao Zedong a crate full of mangoes as a gift.

Now in case you don’t know, mangoes are not exactly a common fruit in China and this was the first time many had even seen a mango. Mao, in a show of the kind of benevolence that would make him ultimately responsible for the deaths of 40 million–80 million Chinese people, declared that these were the people’s mangoes and sent them to a group of workers occupying Tsinghua University. Yes, they were occupying a university. Because education is the enemy.

They decided to send one mango to each of Beijing’s most important factories. And thus began the journeys of Mao’s Miraculous Mangoes!

At the Beijing Textile Factory, they sealed the mangoes with wax so they could be preserved for posterity. Then they laid them out on an altar and all took turns solemnly bowing to the fruits.

When they began to rot, they were delicately peeled and boiled, each worker taking a spoonful of the miraculous mango soup.

But mango fever was just beginning. Plastic, wax, and papier-mâché mangoes were sent around the country and people came from miles around to see the mangoes. Lucky workers were even given fake mangoes in glass cases. They’d be admonished if they didn’t hold them reverently.

Planes were chartered specifically to carry the precious cargo. Mango brand cigarettes were a bestseller.

That was … slightly arousing. In a creepy, Orwellian “Dear Leader” kind of way.

Now again, for many, this was their first time seeing a mango. One rural dentist compared the fruit to a sweet potato. He was put on trial for malicious slander and executed.

That was China during the Cultural Revolution, folks! And that was just the beginning! It went on for almost a decade more and got even crazier!

So next time you’re in your favorite Chinese restaurant, or if you happen to stroll under his big old portrait in the heart of Tiananmen Square, remember to thank your lucky mangoes you didn’t have to live through the Cultural Revolution.