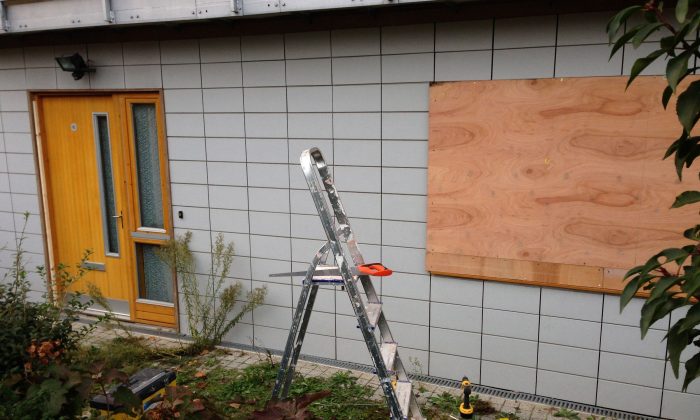 The boarded up window of the residence, where two suspects allegedly held three women against their will, in Brixton, London, Monday Nov. 25, 2013 .British police investigating a slavery case involving three female victims say they are investigating 13 London addresses linked to the two suspects. Police said Monday that inquiries into the new addresses followed an extensive search of an apartment in the Brixton neighborhood of south London. (AP Photo/PA, Oliver Duggan) UNITED KINGDOM OUT - NO SALES - NO ARCHIVES
UK

Aravindan Balakrishnan, who went by the name “Comrade Bala,” and his wife, Chanda Pattni, or “Comrade Chanda” or “Mrs. Busy Bee,” were identified in a report as the two suspects who held three women for as long as 30 years.

The BBC reported that Aravindan Balakrishnan, 73, and Chanda Pattni , 67, were ex-Maoist activists.

The broadcaster cites “national Marxist records” in saying they were leaders at the Mao Zedong Memorial Centre in Acre Lane, located in South Brixton in the 1970s.

Officials said that the three women suffered decades of “physical and mental abuse” and lived with the Balakrishnans as a “collective.” Two of the women met the husband via a “shared political ideology,” a source told the BBC.

The three women were a 30-year-old Briton, a 57-year-old Irishwoman, and a 69-year-old Malaysian woman.

“We believe that two of the victims met the male suspect in London through a shared political ideology, and that they lived together at an address that you could effectively call a ‘collective,’” Metropolitan Police commander Steve Rodhouse told the Daily Star.

He added: “The people involved, the nature of that collective and how it operated is all subject to our investigation and we are slowly and painstakingly piecing together more information. I will not give any further information about it.”

“How this resulted in the women living in this way for over 30 years is what we are seeking to establish, but we believe emotional and physical abuse has been a feature of all the victims’ lives.”

The youngest of the victims was identified as 30-year-old “Rosie,” who sent her neighbor love letters, reported The Sun. However, she warned him not to go after her “mad and evil” captors.

“I’m like a fly trapped in a spider’s web,” she wrote, according to the tabloid. “These monsters here are mad and evil and racist — they’ve locked all doors and windows and keep keys on themselves at all times.”