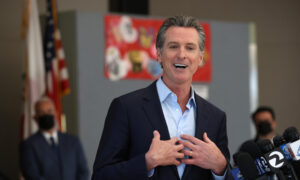 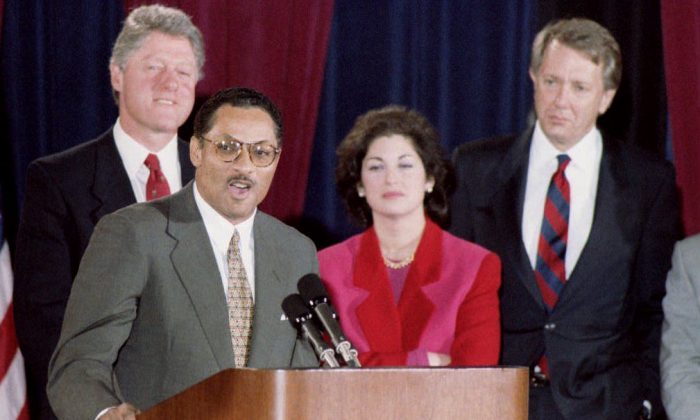 Then Congressman Mike Espy accepts his nomination for Secretary of Agriculture on Dec. 24 1992 in Arkansas as then president-elect Bill Clinton listens. (HERB SWANSON/AFP/Getty Images)
Viewpoints

Mega-wealthy, far-left attorney Steve Phillips, through his political action committee PowerPAC+, is throwing huge sums of money and resources “under the radar” to back Democratic candidate Mike Espy in the tight Mississippi U.S. Senate race that will be decided on Nov. 27.

While Espy paints himself as a relatively moderate Democrat, Phillips—who is based in San Franscisco—is intent on winning another Senate seat, both to counter President Donald Trump and to help re-build a permanent Democratic Party majority, based on his strategy laid out in his Obama-endorsed 2016 book “Brown Is the New White.”

Phillips was heavily involved in Democrat Doug Jones’s shock win against Roy Moore in last year’s Alabama Senate race. He was also the mastermind behind Stacey Abrams’s and Andrew Gillum’s near-victories in the recently resolved Georgia and Florida gubernatorial contests.

All three races relied on the same strategy: Phillips and his mega-wealthy leftist friends financed Maoist-leaning socialist networks in each state. These groups organized mass voter-registration drives and “get out the vote” efforts among their respective states’ Democratic-leaning, but “low propensity” voting, black and Latino citizenry.

This approach, coupled with smear campaigns and overt accusations of racism against Republican opponents, carried the day in Alabama, and came within a whisker of succeeding in Florida and Georgia. All three states saw record Democratic turnout, particularly among black women voters. It was only an unexpectedly high Republican turnout, inspired by fiercely conservative candidates Brian Kemp (Georgia) and Rick DeSantis (Florida), that saved the day for the GOP.

As a Stanford University law student in the 1980s, Phillips was involved with the League of Revolutionary Struggle, a pro-China communist organization. Along with his Maoist comrades, Phillips played a leading role in Jesse Jackson’s “Rainbow Coalition” of the 1984 and 1988 presidential election cycles.

Jackson’s race-obsessed Rainbow Coalition was all about organizing minorities (colors of the rainbow) into one large “progressive” electoral coalition to achieve a socialist America. In Jackson’s day, minorities made up 12 percent of the population. Today, they make up 38 percent, and Phillips wants to finish the job Jackson started.

Phillips revealed his hard-left background in a 2012 pitch for “progressives” to support his old Stanford comrade Cory Booker, then running for the U.S. Senate from New Jersey (with millions of dollars from Phillips).

Phillips wrote, in an article for the PowerPAC+ publication Political Intelligence: “Every progressive person in America should support Cory Booker’s campaign for U.S. Senate. Lest there be any confusion on the Left, allow me to make the case for why this needs to be a priority for all progressive-minded people.

“First, let me make clear that I come out of the Left. I’ve studied Marx, Mao, and Lenin. In college, I organized solidarity efforts for freedom struggles in South Africa and Nicaragua, and I palled around with folks who considered themselves communists and revolutionaries … and I did my research paper on the Black Panther Party. … My political baptism was the Jesse Jackson 1984 presidential campaign, and I’ve drawn my inspiration from Malcolm, Martin, and Mandela rather than Democratic Party triumvirate of Kennedy, Carter, and Clinton.”

After college, Phillips married his Stanford sweetheart, Susan Sandler, the daughter of savings and loan multi-billionaires Herb and Marion Sandler.

Through his organization PowerPAC+, Phillips uses Sandler’s money to back “candidates of color,” particularly in the Southern states. Phillips’s goal, outlined in “Brown Is the New White,” is to build an electoral alliance of “progressive” whites and America’s growing numbers of minority voters to build a “new American majority.”

According to Phillips, the left already has a majority in America: 23 percent of the electorate are “progressive people of color” and 28 percent are “progressive whites.” Get them all to the polls, the theory goes, and America will face an unbeatable Democrat-led coalition: a new Rainbow Coalition that will be in power indefinitely.

We can work to win at the ballot box in 2016 only if Democrats and progressives actually invest in and speak to the New American Majority. #BrownistheNewWhite is in bookstores Feb 2, 2016.

Flipping a Mississippi Senate seat to Democrat from Republican would be a huge boost to Phillips’s plans. PowerPAC+ endorsed three candidates this election cycle: Espy and two in California (Gil Cisneros and Ammar Campa-Najjar).

In a recent podcast on his website Democracy in Color, Phillips boasted that the PowerPAC+ team worked with in-state voter mobilization groups to target 200,000 black voters “under the radar.”

“Over the last two weeks, a PAC called POWERPACPLUS has, according to FEC reports, quietly launched nearly a $400,000 spend in the US Senate race in Mississippi. …

“Five separate independent expenditures … totaling $392,200.16 have been made by the San Francisco based PAC in the last two weeks.

“Banking billionaire Herbert Sandler of California dropped $600K into the PAC on 8/24/18, and the PAC is closely associated with the Sandler family.

“POWERPACPLUS starting with the October 2018 quarterly filing was almost entirely bankrolled for the most immediate spend by Herbert Sandler. …

“Of the $392K, about $99K is going to radio ads. … About $71,000 has gone to a company called Onyx Communications for phone banking … they were listed as one of the companies that POWERPAC.org used for the Doug Jones effort in Alabama. Those transactions through the affiliated PowerPAC.org were largely funded by Sandler’s son in law Steve.”

According to The Associated Press, PowerPAC+ has put at least $1.8 million into the Espy campaign.

After a video surfaced of Espy’s Republican challenger, Cindy Hyde-Smith, complimenting a friend and supporter by saying, “I would fight a circular saw for him. If he invited me to a public hanging, I’d be on the front row,” PowerPAC+ swung into action. The PAC released an ad featuring Hyde-Smith and a group of white people at a lynching with graphic depictions of the victims.

“The use of these horrific images to sow the seeds of racial division, strictly for political purposes, is reprehensible. Mike Espy should immediately call for the removal of this despicable political ad and condemn its use in his campaign,” he said, according to Y’all Politics.

The first week in November, Mississippians started receiving undisclosed political direct mail accusing Hyde-Smith of having voted for Hillary Clinton in 2008 (which she adamantly denies). The mailers came bearing the postal slug TBW, which stands for Terris, Barnes and Walters, a leftist consultancy firm based, like PowerPAC+, in San Francisco. According to Y’all Politics, on Oct. 26, PowerPAC+ paid TBW $312,000 for “doorhangers and direct mails” to “support” Espy.

Phillips protege Booker came to Mississippi to support Espy, just as he went to Alabama for Doug Jones, to Georgia for Stacey Abrams, and to Florida for Andrew Gillum.

During a conference at the Mississippi Civil Rights Museum, Booker stressed the importance of the state’s upcoming Senate elections: “I could be in a lot of places,” he told the media, “but I’m here because I think that of all the races that are going on right now, none will be more of a gamechanger than this Senate race right here.”

While Espy isn’t regarded as particularly “progressive,” Mississippi’s most radical politician, Jackson Mayor Chokwe Antar Lumumba, came out strongly for the Democrat. Lumumba was quoted as saying: “We need leadership in the United States Senate who represents the ideas that will move Mississippi forward. That is why I’m supporting Mike Espy.”

Like his namesake father and a Jackson mayor before him, Lumumba was elected to office through the support of the pro-China group Freedom Road Socialist Organization (FRSO).

“In 2013, the late Chokwe Lumumba, father of Chokwe Antar Lumumba, wowed the entire country when he became mayor of Jackson. We know that a second people’s victory is challenging because those in power have already seen a glimpse of what a people’s platform looks like in practice. Today, the vision will be restored.

“FRSO/OSCL stands with the oppressed and working people of Jackson and the candidate that they have chosen, Chokwe Antar Lumumba. We’re here today driving folks to the polls, phone banking and poll watching! Dare to struggle! Dare to win!”

The FRSO supported its friend Lumumba because the Maoist revolutionary strategy is to build solid bases in the countryside and smaller towns, before attempting to “conquer” larger population centers. The FRSO is intent on destroying what they call “The New Confederacy”—conservatism’s Southern stronghold. This dovetails perfectly with Phillips’s plan to use minority voting power to permanently destroy the Republican Party’s dominance in the South.

Many FRSO members have come out of Phillips’s former League of Revolutionary Struggle. In 2013, Phillips even helped fund a major new FRSO front group called LeftRoots. By supporting Espy, Lumumba is helping the friend of a friend.

“Democratic U.S. Senate candidate Mike Espy announced what he called ‘the most modern headquarters that I think any Democrat has had in Mississippi’s history’ at a ceremony for the opening of his new Jackson campaign office Saturday, Aug. 25,” according to the Jackson Free Press.

“One of Espy’s guests, LaTosha Brown, served an instrumental role in that victory [of Doug Jones]. In Alabama’s special election for U.S. Senate last year, Brown led the Alabama Grassroots Mobilization Project, which put ‘boots on the ground’ in 18 counties, helped pay for about 400 organizers, and provided voter transportation services. For the first time since 1986, Alabama sent a Democrat to the U.S. Senate. …

In 1998, the FRSO gathered 2,000 black socialists and communists in Chicago to form an ongoing “Black Radical Congress.”

During the Congress, a panel was convened on “Organizing the South,” to “discuss the historic role of the Black South in the larger history of Black exploitation and the struggle for Black freedom.”

At the Jackson campaign office opening, Espy explicitly criticized the president’s tariffs on China. Espy said the “tariffs are hurting Mississippi’s farmers because China retaliated by imposing tariffs on agricultural goods in the U.S. like soybeans,” according to the Jackson Free Press.

It’s worth remembering that Phillips’s League of Revolutionary Struggle was pro-China, and that the FRSO more discretely carries on that tradition.

Maybe Espy really was looking out for Mississippi’s hardworking farmers?

Or maybe he was just pandering to his Maoist base?