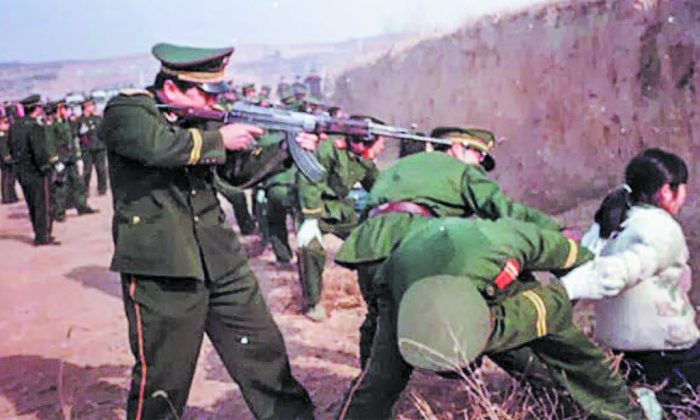 A woman before being executed by a communist soldier in China in this file photo.
The Dead End of Communism

Lauded as progressive, the marriage policies of communist China brought tragedy and tyranny to the traditional family

The last acceptable words of praise for communist China’s founding dictator Mao Zedong, it seems, are of the sociological persuasion.

“Women hold up half the sky,” the chairman famously said. To modern observers, these words—and the social policies that accompanied them—serve to convince that at least there was room for progressive thought under history’s bloodiest tyrant.

Communist movements have long included ostensible appeals to feminism in their revolutionary agendas, which were typically set up in opposition to the traditional or moral structures of the “old society.”

But like many other movements and policies in communist China, what really resulted from Mao’s reforms of marriage and gender relations was tragedy, and sometimes death, for millions of Chinese.

In China, folk legends attribute the creation of marriage rites to the god Fu Xi, who in one version of the myth was none other than the husband of Nü Wa, the mother of humankind. In the Han Dynasty (206 B.C.–A.D. 220), the family-based philosophy of Confucius was elevated to national policy. The Chinese word for nation—”guo jia”—is a combination of the characters meaning “state” and “family.”

In “The Communist Manifesto,” published in 1848, Karl Marx advocated the abolition of the “bourgeois family,” which ostensibly had reduced women to “mere instruments of production.” Similarly to his view on nations, Marx envisioned the abolition of the family. He spoke of a “community of women”—that is, a precursor to the ideas of sexual liberation that cropped up in the mid-20th century.

Upon seizing power in 1949, the Chinese Communist Party (CCP) attempted to diminish the traditional Chinese family wherever possible. Mao’s first marriage, indeed, was an unhappy one, imbuing in him a personal hatred of the old customs. In 1950, he personally helped draft the “New Marriage Law.”

The New Marriage Law has no doubt helped to endear Mao’s early rule to proponents of modern progressive discourse. It did away with overt concubinage, bride prices, and arranged marriages. Meanwhile, propaganda was rolled out that encouraged marital freedom.

But as described in the 1991 book “China’s Bloody Century” by Rudolph J. Rummel, the enforcement of the new law between 1951 and 1955 “probably caused the greatest emotional pain and distress throughout China.”

The New Marriage Law, Rummel wrote, “applied retroactively. This meant reforming millions of existing marriages, which the Party carried out ruthlessly at all levels and through all organizations. Arranged marriages or those involving cash payments were often broken up or annulled; millions of families were destroyed.”

In addition, couples could only get married with the approval of Communist Party authorities. The CCP “argued that marriage has a ‘class character’ and must be subordinated to the revolution. Men and women of different ‘class character’ and ‘political stand’ therefore were simply prohibited from getting married,” Rummel wrote.

Across the country, communist cadres encouraged men and women to engage in “struggle sessions” against their spouses and families. This could be incredibly traumatic for all parties. Rummel cites one account from the period:

The cost of “rationalized marriage,” as Rummel put it, was staggering: nearly 4 million divorce cases, affecting tens of millions of people. Incomplete statistics from different provinces, capturing data from different points of time, show thousands of deaths following the law’s period of implementation. Some even show tens of thousands. One Chinese women’s association estimated that 300,000 people had lost their lives in the chaos and struggle; other estimates go as high as 1 million.

Under the Party’s Eye

While many Chinese died in the process of implementing marital regulations, the CCP’s radical agenda strengthened its totalitarian rule.

As Rummel notes, the CCP, starting with the New Marriage Law, “brought virtually every person under Party control, while severely weakening the traditional Chinese family as an independent source of power.”

The Party’s propaganda about the supposedly emancipatory character of these reforms rang hollow, however, as the upper rungs of the regime leadership—including Mao himself—frequently indulged in extramarital affairs, abandoned wives and children, and helped themselves to legions of young female companions typically chosen from military performing arts troupes.

In 1980, Chinese marriage law was updated to include provisions for the newly introduced One-Child Policy. A national family planning apparatus was established to monitor the population and control reproduction—something that Reggie Littlejohn, founder and director of Women’s Rights Without Frontiers, says is still today a means of reinforcing the Party’s dominance over Chinese women and families.

In the early 1980s, fieldwork in southern China by American Sinologist Steven Mosher revealed that family planning authorities were systemically administering forced abortions even to women who had become pregnant before the One-Child Policy was promulgated. In total, the CCP estimates that 400 million “excess births” were prevented by means of the policy.

In 2015, facing national demographic decline and a skewed sex ratio, the authorities opted for a two-child policy. But forced abortions continue, and the regime’s family planning organization still employs over a million people.

Just as the CCP’s official support for workers and peasants resulted instead in mass starvation and killing, the co-optation of progressive and feminist ideas by communist propaganda did not generally yield improvements for Chinese women, or men.

In the highly commercialized and relationship-based society of China today, bride prices have made a comeback—a phenomenon reflecting the relative scarcity of women. Many females are aborted or abandoned in infancy as a result of reproductive restrictions and the traditional desire to have a male heir. Among the monied political elite, a form of concubinage has also re-emerged, with many officials and businessmen keeping multiple mistresses. China has an abnormally high female suicide rate, being one of the few countries where more women commit suicide than men.

But above all, the Communist Party damaged the one institution of social support that Chinese had relied on for thousands of years to protect themselves against disaster from nature or their rulers.

“The individual Chinese,” Rummel wrote, “was put in a new position, standing alone with no one to screen him or mediate between him and the Party.”