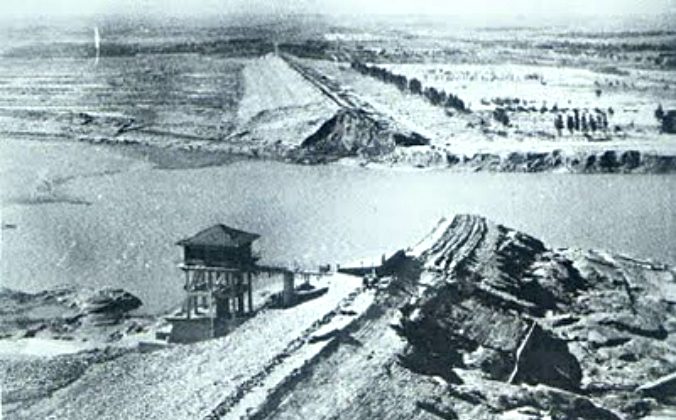 The worst dam disaster in history occurred during the end of Chinese Communist leader Mao Zedong’s decades-long reign, and according to some accounts, was at least partially caused by poor planning and corruption.

The Banqiao Dam had been built along the Ru River in the early 1950s as part of a flood-prevention and electricity-generation program. Chairman Mao ordered officials to “harness the Huai River.”

In 1975, Typhoon Nina slammed the region—Henan Province in central China—with the heaviest rains in history. More than a year’s worth of water fell in 24 hours.

On Aug. 8, 1975, it has been recalled, someone yelled that it “sounded like the sky was collapsing and the earth was cracking” and then, some 280,000 Olympic-sized swimming pools’ worth of water burst through a crack in the dam. Entire towns were destroyed and a cataclysmic loss of life ensued.

The failure triggered a huge inland wave about 6 miles wide and 10 to 25 feet high, rushing downstream at 30 miles per hour. Between 170,000 and 240,000 people died in the dam’s collapse, from drowning and disease, although the party’s official numbers state that 85,600 died. The full scope of the catastrophe was unveiled decades after it occurred. Today, few people inside or outside of China are aware of the disaster.

Chen Xing, a hydrologist who was involved in the construction of the dam, expressed worry over the government’s dam-building policy. He recommended 12 sluice gates for the Banqiao Dam—but the Communist Party criticized him for being too “conservative” and the project was scaled back to five sluice gates.

Why did the dam fail?

The failure of the dam could be attributed to rampant Communist Party corruption and poor standards in combination with Typhoon Nina’s unusually heavy rainfall and flooding. However, the dam was created to withstand a “1,000-year flood,” but it collapsed only 20 years after it was built.

In construction projects, Mao wanted “instant results,” including the Banqiao Dam, according to “Mao: The Unknown Story.” One of his slogans was: “Survey, design, and execute simultaneously.” A fourth precept was later added: “Revise.”

A number of Mao’s building projects “turned out to be a stupendous waste,” and “many had to be abandoned halfway,” noting that 200 out of 500 large reservoirs built in the 1950s were discarded by 1959. And “many others collapsed in Mao’s lifetime,” including the dam, the book continues.

In the 1975 typhoon, “scores of reservoirs built during the Leap crumbled in a storm,” leading to the dam’s collapse, the book adds.

The Communist Party tried to cover up the death toll and even the collapse itself, as it often does when tragedy occurs. If one looks at China’s state-controlled press at the time, it appears to have never happened, according to David Bandurski of University of Hong Kong’s China Media Project.

Furthermore, according to a 1995 Human Rights Watch report, “the Banqiao and Shimantan dam collapses were to a large extent man-made disasters, resulting from flawed water-control policies. Overall lack of government transparency in the dam-building process has contributed” to a situation where many of China’s dams should be considered unsafe. The 1975 dam breaks were at the time “almost entirely unreported beyond the confines of China’s top party leadership,” it added.

When the Banqiao and other Chinese dams were constructed, cracks and separations appeared, which were repaired and reinforced with aid from Soviet engineers. After the repairs, the dam was referred to as the “iron dam” and was mistakenly believed to be unbreakable.

China houses more than 40,000 “at risk” reservoirs, which were, along with flood-prevention systems near major rivers, built between 1950 and 1980, as reported by Radio Free Asia. Many of the Mao-era systems were made from rock and clay and have a lifespan of 50 years—a headache for China’s current leadership.