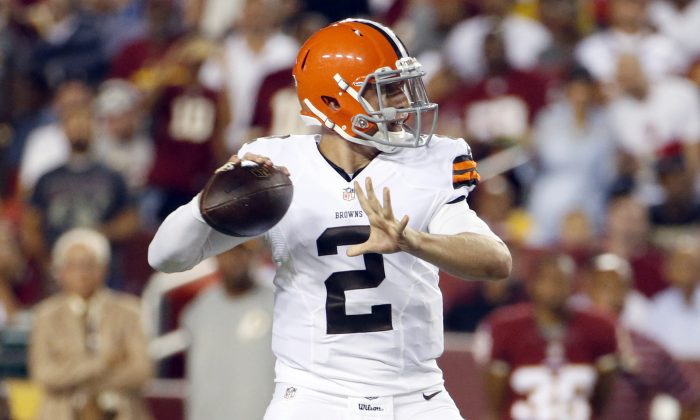 Cleveland Browns quarterback Johnny Manziel (2) looks to pass during the first half of an NFL preseason football game against the Washington Redskins Monday, Aug. 18, 2014, in Landover, Md. (AP Photo/Evan Vucci)
US

“They for real compared Manziel to Jeter!? Seriously? That was for real?” said one user.

“Monday Night Football trying to compare Manziel to Jeter is the most ESPN thing I’ve ever seen. Who’s the [expletive] who liked that idea?” said another.

“Hey @espn. If u were a real sports network w any sports soul there is no way u would compare Johnny #Manziel to #jeter,” said another.

“Gruden just compared Manziel to Jeter??? Someone needs to tell him this is football. Or just tell him to shut up, whatev…” said yet another.

Manziel was at the helm for part of the preseason game against the Washington Redskins on Monday night.

Neither he nor other quarterback Brian Hoyer played well. Neither scored a touchdown. The score with several minutes left in the second quarter was 3-0 Browns.

“Looks like this will remain a tough decision for Mike Pettine and Kyle Shanahan, but not for the reasons they hoped it’d be,” said Albert Breer of the NFL Network via Twitter, referring to the poor play by both Hoyer and Manziel.

“Two drives for Hoyer, two for Manziel. No points. Lots of mess. Long night of thinking for Mike Pettine,” added NFL.com columnist Judy Battista in the middle of the second quarter.