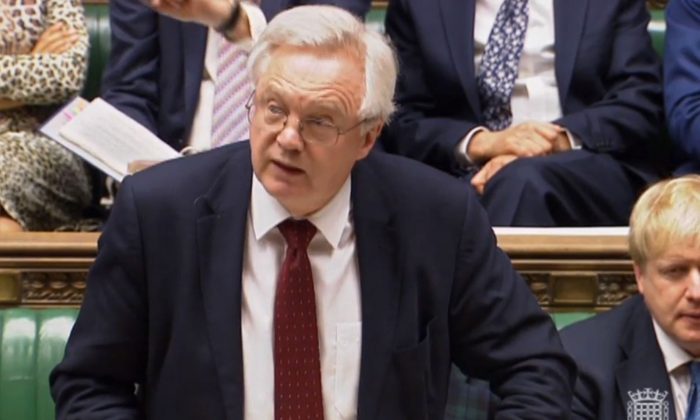 Britain's Brexit Secretary David Davis speaks in the House of Commons, London during the second reading debate on the EU (Notification on Withdrawal) Bill on Jan. 31, 2017. (PA via AP)
International

LONDON—Dozens of British lawmakers said Tuesday that they will vote to authorize the start of European Union exit talks—signaling likely victory for the government on the vote it had fought in court to avoid.

The House of Commons began a two-day debate on a bill that lets Prime Minister Theresa May trigger two years of divorce negotiations, as the government races to meet a self-imposed March 31 deadline to begin the process.

The government was forced to introduce legislation after a Supreme Court ruling last week torpedoed May’s effort to start the process of leaving the 28-nation bloc without a parliamentary vote.

The government argues that British voters decided to leave the EU in a June 23 referendum, and no further authorization is needed.

Brexit Secretary David Davis said legislators had to answer a simple question: “Do we trust the people or not?”

“It’s not a bill about whether the U.K. should leave the union or indeed about how it should do so,” he said. “It is simply about Parliament empowering the government to implement a decision already made—a point of no return already passed.”

Scores of lawmakers stood to speak in a debate that began at lunchtime and looked set to stretch on until midnight. A majority from both the governing Conservatives and the opposition said they would respect the voters’ decision and back the bill.

Anti-EU legislators did so with enthusiasm. Pro-Brexit Conservative Bill Cash said the vote to leave the EU was a “peaceful revolution” on a par with votes for women and the working class.

Fellow Conservative John Redwood said Brexit would transform Britain’s legislature from a “puppet Parliament” overshadowed by Brussels, to a Parliament “made great by the people.

But many pro-EU legislators agreed to back the bill with reservations, expressing fears that Britain will be poorer and more isolated outside the bloc’s single market of half a billion people.

“You can’t go back on your word because you don’t agree with the result,” said pro-EU Conservative Anna Soubry. “But I want to say this: I believe history will not be kind to this Parliament nor indeed the government I was so proud to serve in.”

The main opposition Labour Party said it would try to amend the bill to give lawmakers final approval of a settlement with the EU, but not block it.

But some Labour lawmakers who represent areas of the country that voted to remain in the EU said they would respect their constituents’ wishes and vote against triggering the Brexit process. The Scottish National Party and Liberal Democrats also say they will vote against it.

Former Liberal Democrat leader Nick Clegg said Parliament should reject the bill and force the government come up with a better plan for Brexit that aspires to keep the U.K. in the single market.

Clegg said the need to strike deals outside the EU had driven May to “sidle” up to U.S. President Donald Trump, a president “whose nativism, whose isolationism, whose protectionism is diametrically opposed to the long-term strategic interests of the United Kingdom.”

Ken Clarke, a pro-EU Conservative, said promises of a bright economic future outside the bloc were an “Alice-in-Wonderland”-style fantasy.

“Apparently you follow the rabbit down the hole and you emerge in a wonderland where suddenly countries around the world are queuing up to give us trading advantages and access to their markets that previously we had never been able to achieve as part of the European Union,” he said.

“No doubt there is somewhere a hatter holding a tea party with a dormouse,” he added.

Assuming lawmakers agree on Wednesday, the bill will move on to committee scrutiny and then Parliament’s upper chamber, the House of Lords.

Ministers hope the bill can be pushed through both houses of Parliament by early March so the government can meet its March 31 deadline.