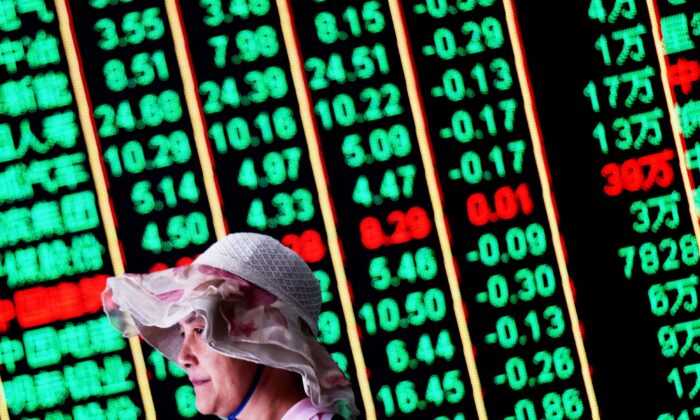 A woman walks past a board showing China’s stock market movement. (AFP via Getty Images)
China

Many of China’s A-Share Companies Lost Billions in 2021, Some May be Delisted from Domestic Stock Exchanges

Most of China’s A-share companies have disclosed their 2021 annual reports. A review of the reports indicates that 40 percent of the companies experienced losses. Noteworthy were the 11 companies that had each losses exceeding $1.47 billion and the over 200 reported at risk of being delisted from China’s two exchanges.

According to the Shanghai-based Wind Information Company, a leading financial information firm, 4,794 of China’s 4,803 A-share companies met the April deadline and submitted their 2021 annual reports. Of those companies, 1,851 or 38.5 percent experienced losses last year.

China’s A-shares, or domestic shares, are stocks issued by Chinese-based companies, valued in renminbi (RMB), and traded on the Shanghai and Shenzhen exchanges, as well as the National Equities Exchange and Quotations.

A breakdown by industry shows that due to last year’s surge in commodity prices the energy and materials sectors led with profit increases of 140 percent and 80 percent respectively. The real estate sector reported a 78 percent loss while public utilities fell 56 percent and daily consumption dropped 43 percent.

The Wind Information report also said an alarming 200 A-share companies are at risk of being delisted from China’s exchanges. Many are well known to China’s investors.

In April 1998, China’s exchanges in Shanghai and Shenzhen announced they would be applying one of two identifiers on the stocks of companies with unusual financial conditions. When placed at the beginning of a stock name, the identifier alerts the company of its “special treatment,” that is, potential risk of being delisted.

On April 8 of this year, China’s 21st Century Business Herald said 228 Chinese A-share companies had reached the “*ST” level. Of these, 123 could be delisted for major violations. As defined by the Chinese Securities and Futures Commission (CSFC), major violations include financial fraud, illegal information disclosure, stock price manipulation, insider trading, and obstruction of investigations.

The China Securities Times raised another concern affecting 250 of China’s A-share companies. Each of their annual reports was issued a “non-standard opinion” this year. This means the content of their annual report was questionable in terms of its truthfulness, accuracy, and completeness.

The industry sectors issued the highest volume of “non-standard opinions” included, real estate at 23 companies, 22 in biology and pharmaceuticals, and 19 from the computer industry. Of the remaining 10 percent, A-share companies representing the social services, textiles and apparel, and communications and media sectors were issued “non-standard opinions.”

Most notable among the companies with questionable annual reports was the information sector’s CITIC Guoan. This company’s majority shareholder, China CITIC Group, a state-owned investment company, was formed with the approval of the communist regime’s State Council.

CITIC Guoan’s latest abnormal numbers came to light after China’s May Day holiday this year. The company’s 2021 annual report revealed its third consecutive loss totaling $218 million. From April 25 to 28, the company’s stock price rose from $0.37 to $0.49 per share, but plunged just before the annual report submission deadline. By May 20 it was at $0.30 per share. Due to the company’s prior history, these fluctuations raised suspicions about fraudulent reporting.

One of CITIC Guoan’s former subsidiaries, Qinghai CITIC Guoan, was fined $88,000 by the Party’s Securities and Futures Commission for fraudulent activities between 2009 through 2015 that showed profits inflated by $147 million.

In speaking about this matter with the Epoch Times on May 8, Mike Sun, a North American investment adviser, said CITIC Guoan’s erratic stock price reporting has been harmful to investors. He noted that in Western countries, this reporting, combined with the company’s fraudulent history over seven years, would have warranted a delisting. But this is not the case in China. If CITIC Guoan submits a favorable annual report next year, the company can continue to operate without fearing it will be delisted.