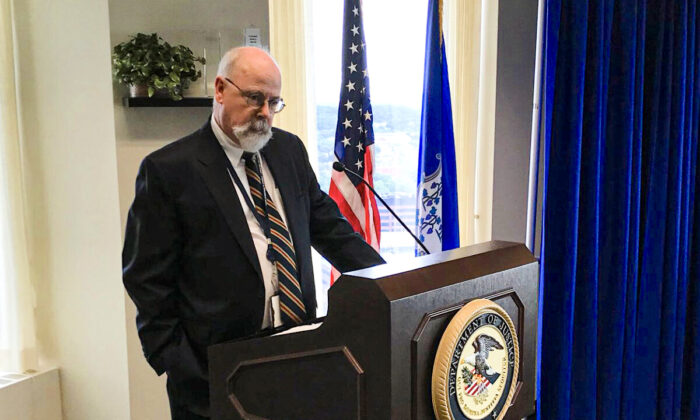 John Durham speaks at a conference in New Haven, Conn., on Sept. 20, 2018. (Courtesy of the U.S. Attorney's Office for the District of Connecticut)
By Jack Phillips

Former Director of National Intelligence John Ratcliffe said he expects special counsel John Durham’s team to indict more suspects in connection to the origins of the Trump-Russia probe and the discredited Steele dossier.

Last week, a grand jury empaneled by Durham indicted Russia analyst Igor Danchenko, who previously worked for the left-leaning Brookings Institution, for allegedly lying to the FBI. Danchenko had been the main source for the dossier created by former UK spy Christopher Steele that was, in turn, used by the FBI during its inquiry into whether the 2016 campaign of Donald Trump colluded with Russia.

“When I became the director of national intelligence, I said, ‘Listen, I want to see all of the intelligence about this supposed Russian collusion,’ Ratcliffe said during a Fox Business interview on Sunday. “What I found was, and as you’re finding out, is there was, of course, no Russian collusion between the Trump campaign and Russia, but what I did see in intelligence documents, some of which I’ve now declassified, that there was collusion involving the Clinton campaign and Russians to create a dossier.”

Numerous documents that Ratcliffe said he had provided to Durham are being used in the special counsel’s investigation, he told Fox.

“I declassified the documents that we’ve talked about, but I gave John Durham over 1,000 other documents that have not yet been declassified that I know, including intelligence that goes specifically to this criminal activity that would be the basis for further indictments,” Ratcliffe continued, adding that he believes Durham’s grand jury believes the Steele dossier “is criminal in nature.”

During the 2016 election, Steele was hired by Fusion GPS to conduct opposition research on Trump. Fusion GPS was retained by high-powered Washington-based law firm Perkins Coie on behalf of the Democratic National Committee

Numerous claims pushed in the dossier turned out to be false, triggering congressional, inspector general, and criminal investigations as to why it was used as the basis of a FISA court order to conduct surveillance of a then-Trump campaign aide.

Those who were involved in the construction of the dossier, as well as individuals who promoted it “falsely, would be in jeopardy,” Ratcliffe claimed. “I know that that’s what John Durham is looking at, and as I talked about, this goes to the highest levels of our government and government agencies involved,” he added.

“I continue to think there will be many indictments based on the intelligence that I gave to John Durham and that I have seen,” he continued.

Durham’s team also indicted former Perkins Coie lawyer Michael Sussmann, alleging he lied when he told former FBI General Counsel James Baker in September 2016 that he was not representing a client when he provided Baker with a now-debunked claim that the Trump Organization was communicating electronically with a Russian bank.

Following his arrest on Nov. 4, a lawyer representing Danchenko attempted to enter a plea of not guilty but a judge said it was premature, according to reports. Danchenko’s lawyers haven’t responded to a request for comment and have not issued any public statements regarding their client.