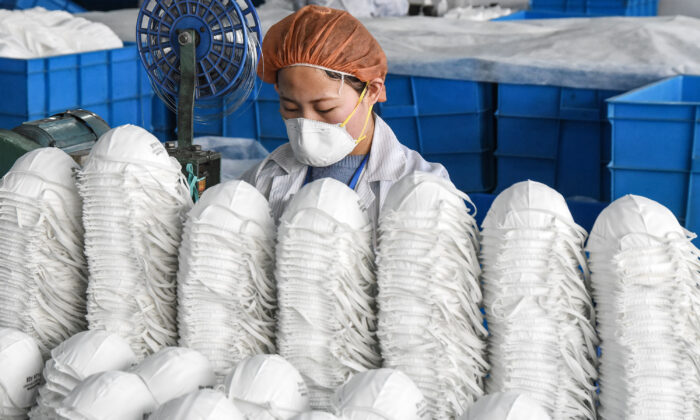 A worker producing protective masks at a factory in Handan city, Hebei province, China, on Feb. 28, 2020. (Str/AFP via Getty Images)
By Cathy He

Workers at many factories that manufacture masks in China don’t wear masks or gloves while handling the products, a Chinese broker has revealed, prompting further questions about the quality of Chinese medical supplies amid a global shortage.

He recounted visiting one dust-filled factory where workers were handling masks from the factory line with bare hands and without wearing masks.

But countries including the Netherlands, Turkey, and Spain have complained that some Chinese-made supplies don’t meet quality standards.

The Netherlands on March 28 said it had recalled about 600,000 masks shipped from a Chinese manufacturer. Dutch health officials said the masks didn’t fit properly or had defective filters.

In addition, the United Kingdom said it would seek refunds for millions of virus antibody test kits ordered from China after a study found they returned inaccurate results, The Telegraph reported.

Last week, the Chinese regime tightened rules governing the export of medical equipment in an attempt to address the concerns. Authorities announced on March 31 that only manufacturers who were accredited to sell their products within China could export test kits, surgical masks, protective gowns, ventilators, and infrared thermometers.

Since the rule change, Chinese customs have confiscated 11.2 million medical supplies that came from unaccredited manufacturers, according to customs data released on April 5. This included 9.9 million masks, 155,000 protective suits, and 1.08 million testing kits.

Chen was, until recently, an e-commerce seller, before his switch to exporting masks, after receiving increased requests from his overseas clients as the pandemic worsened outside of China.

He said that most of the factories making masks were initially textile or electronics factories that quickly shifted production to meet the surging demand, so their equipment and technology often don’t meet the standards.

Chen added that some factories would simply purchase the accreditation needed to make masks.

Some footage shows workers not using gloves when handling masks being processed on a conveyer belt, while one video shows a man wiping his shoe with a bunch of masks piled on the floor.