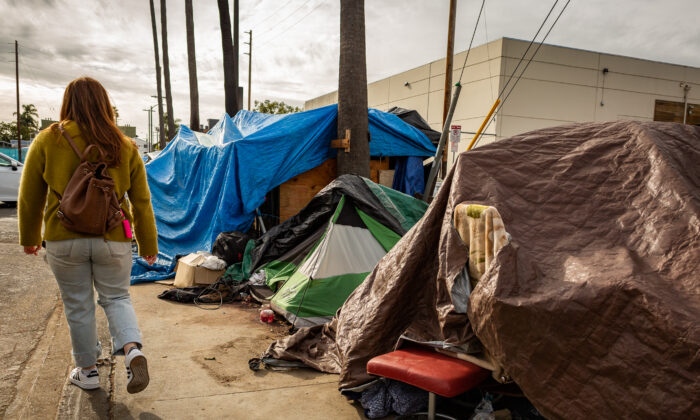 Soledad Ursua, the chairwoman of the Venice Neighborhood Council, knew she had to speak out when crime, drug addiction, and homeless encampments began to increase in the small Los Angeles community. She claims local officials have neglected the needs of the community while funding expensive projects that haven’t solved the fundamental problems.

“Venice Beach has always been sort of on the fringe, it’s a very bohemian-like community, it’s always been a little bit gritty,” Ursua said during a recent interview on EpochTV’s “American Thought Leaders” program.

“It’s not Santa Monica, and that’s what I loved about it, it was very edgy. And so, there’s always homeless people there. But really, what we’ve seen is the drugs that have really changed the landscape.”

Ursua said restrictions during the COVID-19 pandemic exacerbated the neighborhood’s homelessness crisis. Officials also rolled back regulations on homeless encampments and other municipal codes to try to mitigate the spread of the virus by allowing homeless individuals to shelter in place.

The result? The number of homeless people dwelling in Venice Beach skyrocketed, and homeless-related crimes increased by 260 percent, according to Los Angeles Police Department statistics. Some members in the community described it as the “Wild, Wild West.”

Los Angeles City Councilmember Mike Bonin, who represents the area, is facing a recall threat from dissatisfied residents who say he’s done very little to help the homelessness crisis and clean up the 11th District’s streets. Petitioners have until Nov. 10 to collect 27,387 signatures to trigger a special election.

The Los Angeles Fire Department (LAFD) also released a report this year that found 24 fires are set per day, and that 54 percent of fires in Los Angeles are caused by encampments.

“I myself live in a 100-year-old duplex, and my worst fear is that a fire could take out the entire neighborhood,” Ursua said.

“In January, we had a fire start on the Venice Boardwalk. It burned down a two-story commercial building.”

She said the building was valued at $26 million, and now, the property owner is suing the city.

“At the end of the day, it’s the taxpayers that are going to pay for this.”

It was a multifaceted issue that generated headlines and caught the attention of Los Angeles Sheriff Alex Villanueva over the summer. Videos of the chaos on the Venice Boardwalk went viral on social media. Homeless people could be seen fighting with each other, openly using drugs, assaulting tourists and business owners, and setting fires.

Villanueva deployed the department’s Homeless Outreach and Services Team (HOST) to connect the homeless with housing and other rehabilitation resources.

“What we’ve had to do as residents is go to the media, oftentimes, because our cries for help fall on deaf ears. I think what was a win for us was getting the attention of Sheriff Villanueva—he saw what was happening on the boardwalk,” Ursua said.

The small beach town has always had a presence of homeless people, or “street people,” although they were largely artists, entertainers, and nomads. Business owners knew them by name. But when the stay-at-home orders went into effect in March 2020, homeless people from other parts of the state were bused into the neighborhood and dropped off. Venice Beach became a sanctuary zone for those seeking shelter.

It’s a common refrain among state officials that the solution to the surge in homelessness is housing. However, Ursua and other community members disagree that it’s solely a housing-first solution.

“It’s not simple as if they lack a house. A lot of them suffer from drug addiction and mental illness,” she said.

Ursua added that “the policies that are set forth, all they do is guarantee that people who are living on our streets are going to die on our streets.

“They don’t understand this population, they think that it can all be solved with a house or a home. It’s not true, and so we’re finding that these elected officials just don’t really understand the situation at all—we’re the ones that understand it, because we actually live with these people on our streets.”

The neighborhood council—which advises their respective Los Angeles City Council Districts—has been active in passing recommendations for their council members to implement in the city council.

Parents also became involved, too, when Venice’s public parks became dangerous drug-dealing zones between gangs and some of the homeless. A local elementary school had RVs parked outside of it, which made parents increasingly worried about their children’s safety when walking home from school.

“We have slowly been organizing, we’re growing our circles, we’re talking to more who are concerned, they’re bringing their groups and we’re talking to other neighborhoods who are facing the same issues,” Ursua said.

“We’re residents, everyday residents who demand accountability, we want real solutions for the homeless, we want them to be treated for mental illness and drug addiction issues. … Just imagine what it’s like to be one of these homeless individuals who is suffering from mental adult illness. This is the most traumatic circumstances that we could be putting them in.”

In January, the Los Angeles County Department of Public Health published a report about the causes of death among people experiencing homelessness, with drug overdoses topping the list. In addition, “the first seven months of 2020 saw an alarming increase in overdose deaths,” according to the report (pdf).

“What that tells me is that we need to get people off of the streets right now. Everything that we’re doing today is leading towards these causes of death,” Ursua said.

“What I learned is that drug addiction is very violent, you can’t just wake up one day and decide that you’re going to get off drugs. It just doesn’t work that day, that way. What’s really needed is a serious intervention. And we just keep thinking that it’s simply will be housing that fixes it, and it’s not.”

Proposition HHH—a $1.2 billion bond passed by Los Angeles voters in 2016—was meant to create up to 10,000 supportive housing units across the county. According to a September 2020 report by L.A. Controller Ron Galperin, only three projects had been completed with a total of 179 supportive units and 49 non-supportive units. There were also 5,522 additional units in development, but nearly 73 percent of these had not yet begun construction.

The report also indicated that each unit under construction, using HHH funds, costs $531,711 on average, with future projects expected to cost even more. When the report was published, there were 30 projects under construction and 78 in pre-development.

“What we found was that 30-60 percent of the costs went to soft costs,” Ursua said. “Those are your consultants, your architects, engineers, professional costs, so the money wasn’t going to housing, and that’s a huge red flag, your soft costs shouldn’t really be more than 10 percent. There’s something really wrong with these deals.”

Ursua emphasized that until the mental health and drug abuse concerns are addressed, housing can’t solve the entirety of the homeless crisis.

“That’s because the federal policy is just Housing First. It’s the housing first, questions later. It’s very naive, they just think, give somebody a house and you know, we won’t have to deal with it.”