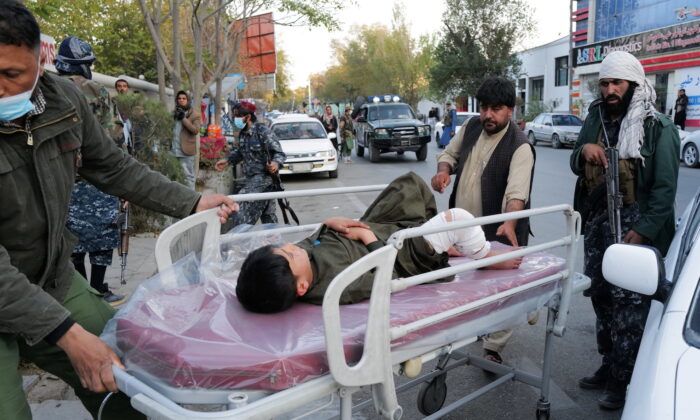 A boy, injured during a blast, lies on a stretcher at the entrance of a hospital in Kabul, Afghanistan, on Nov. 2, 2021. (Zohra Bensemra/Reuters)
Afghanistan

An explosion that was immediately followed by a deadly assault at a large military hospital in the capital of Afghanistan killed more than a dozen people on Tuesday, according to reports.

Hibatullah Jamal, a Taliban member who serves as the group’s minister of defense, said that “there are casualties among both our personnel and civilians,” also noting that he is not immediately clear about the official death toll.

A Taliban member, speaking on condition of anonymity, told news agency AFP that “19 dead bodies and about 50 wounded people” were transported to hospitals in Kabul, but there was no officially confirmed casualty toll.

The attack was carried out by a group of gunmen and started with an explosion that rocked the entrance of the 400-bed Sardar Mohammad Daud Khan in Kabul’s 10th district.

The explosion was immediately followed by an assault, with gunmen breaking into the hospital grounds and firing their weapons.

“The attack was initiated by a suicide bomber on a motorcycle who blew himself up at the entrance of the hospital,” a Taliban member in charge of the media team told AFP.

Taliban spokesman Bilal Karimi said four of the attackers were killed by Taliban security forces who pushed back the insurgents. A fifth member of the group was reportedly captured.

Tuesday’s attack has not yet been claimed by any group and comes just days after the ISIS terrorist group carried out a deadly bomb attack at a mosque in the Afghan capital on Oct. 31, killing several civilians during prayers. On Monday, ISIS claimed responsibility for the explosion in Kabul the previous day.

Photographs shared by residents showed a plume of smoke over the area of the blasts near the former diplomatic zone in the Wazir Akbar Khan area of the city and witnesses said at least two helicopters flew over the area as the assault went on.

A health worker at the hospital, who managed to escape, said he heard a large explosion followed by gunfire that lasted a couple of minutes. About 10 minutes later, there was a second, larger explosion, he said.

ISIS, which has carried out a series of attacks on mosques and other targets since the Taliban’s seizure of Kabul in August, mounted a complex attack on the hospital in 2017, killing more than 30 people.

The group’s attacks have caused mounting worries outside Afghanistan about the potential for the country to become a haven for terrorist groups as it was when al Qaeda attacked the United States in 2001.