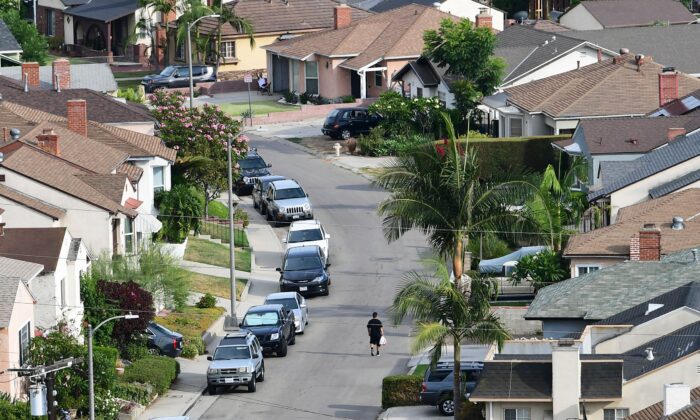 A man walks along a street in Los Angeles on July 30, 2021. (Frederic J. Brown/AFP via Getty Images)
Southern California

LOS ANGELES—Some renters in California face up to a 10 percent increase in rent starting Aug. 1.

That means a monthly increase of $200 to $300 on average for many renters in Southern California who are already paying some of the highest rates in the country.

The rental hikes are authorized by a statewide rent control and tenant protection law, Assembly Bill 1482, that was signed by the governor in October 2019.

The increase could add strain on renters who are already spending disproportionate amounts of their income on rent, according to Unai Montes, spokesman for Housing California, a homeless and affordability organization.

“From a housing perspective, we are very worried about those who are spending too much on housing; that just makes them vulnerable,” Montes told The Epoch Times.

Many renters in the state are stuck living where they are, even though they are being squeezed by high housing costs and higher prices on everything, he said.

The state needs to continue to focus on increasing housing supply and other programs to help residents, he said.

AB 1482 caps annual rent increases in the state at 5 percent plus the cost of living, which reached 9.1 percent nationally last month, but restricts most increases to 10 percent.

Rent-increase moratoriums imposed on landlords by state and local jurisdictions have been in effect for most of the pandemic period. For landlords still struggling to recover, the increases might not be much help.

“There are a lot of landlords that still haven’t been paid,” Brittney Benson, general manager of the Los Angeles-based National Association of Independent Landlords, told The Epoch Times. “If someone’s not paying rent, raising it isn’t going to make a huge difference.”

The state estimates about 1.5 million tenants are facing eviction following the moratorium that allowed them to claim exemption from rental payments if they were affected by the pandemic. Some property owners haven’t received rent payments from tenants for more than two years and are waiting to start the eviction process.

Rent increases may give landlords an opportunity to catch up, but it could also create more problems, Benson said.

“That can definitely be a significant jump for [renters] each month,” Benson said. “I do fear that with those kinds of increases, tenants will be moving and looking for something cheaper. It’s definitely a mess.”

The law set rent caps and established just-cause requirements that had to be met before a landlord could evict a tenant. The law exempts most single-family homes and condominiums, commercial properties, and housing built within the last 15 years, according to the California Apartment Association, the nation’s largest statewide trade group for owners, investors and developers of rental homes and apartments.

In cities that already have a rent control ordinance in place, AB 1482 extends rent caps to some additional housing not covered under existing local laws, the association said.

The number of Californians who can’t afford rent is growing, according to Vanessa Cordero of the Tenant Association of California, a tenant rights organization.

“What’s going to happen when no one can afford to live in California? Who’s going to work at Starbucks, the market, gas stations? The economy will collapse here,” Cordero told The Epoch Times.

She said she believes the state should pass a law that limits the amount of rent a landlord can charge based on the median income for the city or the county.

Housing affordability is a big problem for a majority of Californians, according to those surveyed in March by the nonprofit think tank Public Policy Institute of California.

“Today, residents in Los Angeles, the San Francisco Bay Area, and Orange/San Diego are more likely than those elsewhere to say it is a big problem,” the institute’s statement read.

In Los Angeles, 71 percent of those surveyed said housing affordability is a big problem, and in Orange County, 66 percent agreed.