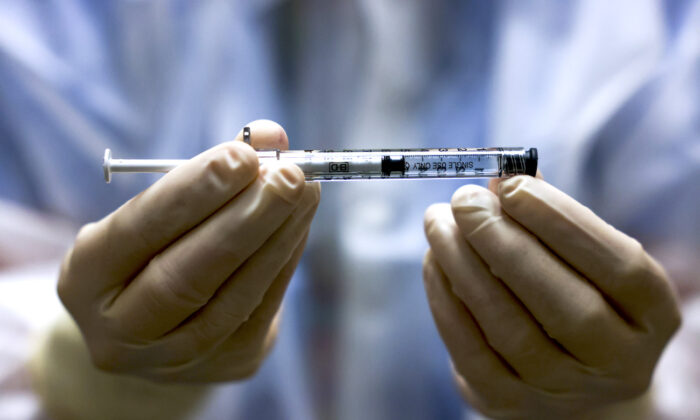 An investigational pharmacy technician holds a dose of the Johnson & Johnson COVID-19 vaccine before it is administered in a clinical trial in Aurora, Colorado, on Dec. 15, 2020. (Michael Ciaglo/Getty Images)
Vaccines & Safety

Many reported adverse events in COVID-19 vaccine trials come from those who received the placebo shots, with nearly a third of placebo recipients involved having reported at least one adverse event, but “significantly more” adverse events were reported by those in the vaccine groups, according to researchers at Beth Israel Deaconess Medical Center, a teaching hospital of Harvard Medical School.

Adverse events (AEs) that appear to be induced by placebos are referred to as “nocebo” responses.

Scientists conducted a meta-analysis of 12 randomized, placebo-controlled COVID-19 vaccine clinical trials, in order to compare rates of adverse events reported by those who took the vaccines to that of those who took the placebo shots.

They found “significantly more AEs were reported in vaccine groups compared with placebo groups, but the rates of reported AEs in the placebo arms were still substantial.”

In particular, about a third of trial participants who received the placebo shots had reported at least one adverse event, with the most common symptoms being headache and fatigue.

The findings are published in the JAMA Network Open journal on Jan. 18.

“Adverse events after placebo treatment are common in randomized controlled trials,” the lead author of the study, Julia Haas, said in a statement. “Collecting systematic evidence regarding these nocebo responses in vaccine trials is important for COVID-19 vaccination worldwide, especially because concern about side effects is reported to be a reason for vaccine hesitancy.”

Even though “significantly more” adverse events were reported in the vaccine cohort, the authors focused on the placebo cohort and the nocebo effect in their analysis. In the introduction of their study, authors wrote: “a substantial proportion of the population … intends to refuse vaccination,” and that “[c]ounteracting the underlying motivations for vaccination hesitancy is therefore crucial to overcome this worldwide crisis.”

Researchers, in selecting studies for their analysis, only included them if participants were asked in the study about specific adverse events within seven days of injection. Furthermore, only adverse events “in terms of solicited reactogenicity symptoms were derived,” the authors noted. As such, other reported adverse events that may have arisen but were not anticipated or asked about in the studies were not taken into account in the analysis.

The authors also noted that “[l]ong-term observations or follow-up data were not considered as outcomes in the meta-analysis, and neither were serious AEs.”

According to a press release from the Beth Israel Deaconess Medical Center, “While this [vaccinated] group received a pharmacologically active treatment, at least some of their adverse events are attributable to the placebo—or in this case, nocebo—effect, as well given that many of these effects also occurred in the placebo group.

“Haas and colleagues’ analysis suggested that nocebo accounted for 76 percent of all adverse events in the vaccine group and nearly a quarter [24.3 percent] of all local effects reported,” the release stated, referring to the effect after the first vaccination.

“Headache, fatigue, malaise, and joint pain were common in both groups and seem to have been particularly associated with nocebo,” the authors said in the study.

Researchers’ calculations concluded that after the second dose, the “nocebo effect” accounted for 51.8 percent of systemic and 16.2 percent of local adverse events.

Ted Kaptchuk, a senior author of the paper, as well as a professor of medicine at Harvard Medical School and director of the Program in Placebo Studies and the Therapeutic Encounter at BIDMC, believes it is ethically necessary to fully inform participants about the vaccines’ potential adverse reactions, as well as the nocebo effect.

“Nonspecific symptoms like headache and fatigue—which we have shown to be particularly nocebo sensitive—are listed among the most common adverse reactions following COVID-19 vaccination in many information leaflets,” Kaptchuk said in a statement. “Evidence suggests that this sort of information may cause people to misattribute common daily background sensations as arising from the vaccine or cause anxiety and worry that make people hyper alert to bodily feelings about adverse events.”

“Our findings lead us to suggest that informing the public about the potential for nocebo responses could help reduce worries about COVID-19 vaccination, which might decrease vaccination hesitancy,” he said.

The reason for this, researchers suggested, may be because the second dose of the vaccines “may have produced both a more robust immune response and a correspondingly more robust set of AEs.”

They also hypothesized that the higher rates of adverse events in the vaccine cohort after the first vaccine dose may have led the vaccinated participants to have “higher expectations” for adverse events when they were given the second jab.

Editor’s note: The headline and structure of the article have been adjusted for clarity.