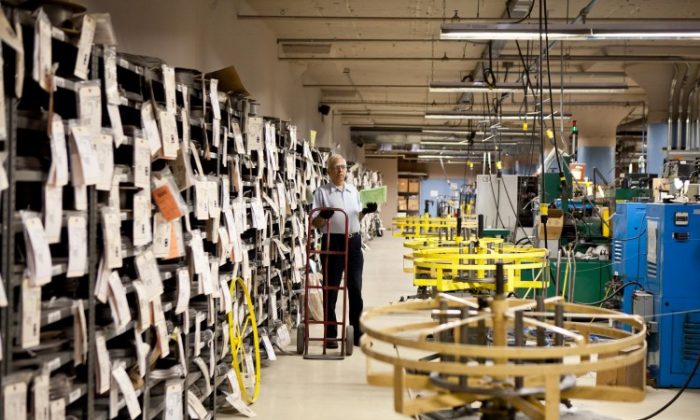 A worker at Lee Spring. Necessary skills require specialized training and workers are difficult to find and train. (Amal Chen/The Epoch Times)
US

NEW YORK –More opportunities for small manufacturers to set up shop and stay long-term in southwest Brooklyn are popping up, but skilled laborers are still a hard-to-come-by and precious commodity.

Lee Spring Ltd., a spring manufacturer, has been in business in Brooklyn since 1918. They have moved three times, all from areas that were once zoned for manufacturing but became residential.

“We even turned down leases from attractive locations here in Sunset Park, where they would only give us 10-year leases, for fear that what they were really thinking of 10 years out is residential conversion,” Steve Kempf, CEO of Lee Spring, said.

Lee Spring moved to the Brooklyn Army Terminal in 2008 with a minimum 20-year guarantee that the space would remain a manufacturing zone. The terminal wasn’t always a place for small business.

New York City Economic Development Corporation (NYCEDC) has divided the large spaces into more affordable smaller spaces at $8 per square foot. In nearby Williamsburg where residential space is high in demand, $45 per square foot is the going rate.

The city offered Kempf grants spread over five years to stay in Brooklyn, but the city of Bayonne, N.J., offered four times the benefits. He opted to stay in Brooklyn to keep his skilled local workers and, like so many New Yorkers, to avoid the commute.

Kempf is grateful for the workers he has, but he says finding skilled employees is difficult.

“Manufacturing, and especially manufacturing of springs, isn’t as sexy as it was 40 years ago. Kids at school, it’s not immediately what they think they want to do,” said Kempf.

Anthony Giumenta, president of Architectural Grille, was also offered a move to New Jersey, but chose to stay in Brooklyn to avoid losing the skilled workers he had taken so much time to train.

“To get someone who knows the trade is very difficult. We have to take them and break them in.” Giumenta said. He believes the elimination of shop class in school has played a big part.

Both Giumenta and Kempf have gone to schools in the area expressing their desired skills, but feel the schools have come up short in preparing students for real world manufacturing jobs.

Councilwoman Diana Reyna, chair of the Committee on Small Business, visited the businesses to help address the issues. She cited the new Williamsburg Architectural and Design School, which specializes in trade. The information she gathered on Monday can be shared with these schools to shape the curriculum to match the needs of local businesses.