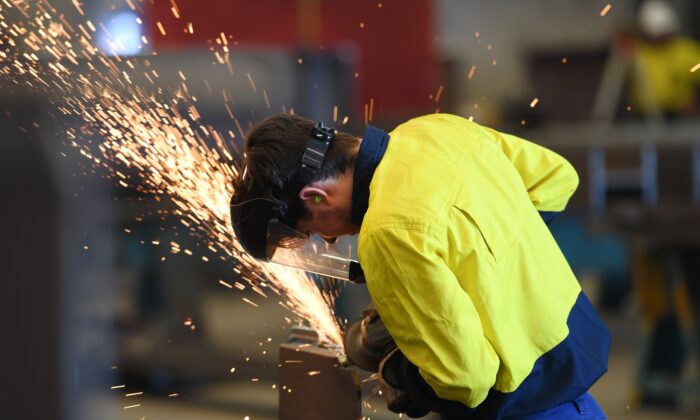 A worker is seen on the production floor at the Civmec Construction and Engineering facility in Perth, Australia, March 10, 2017. (AAP Image/Dan Peled)
Australia

Australia’s manufacturing sector was barely growing in September as border closures and coronavirus lockdowns continued to stifle activity, although the industry is hoping for a rebound in coming months as restrictions ease.

The Australian Industry Group’s performance of manufacturing index eased 0.4 points to 51.2, just holding above the 50 level which separates growth in the sector from contraction.

Ai Group chief executive Innes Willox said the solid recovery from late 2020 has all-but-stalled due to lockdowns in the nation’s two largest states, NSW and Victoria.

“While sales and employment were both lower in September, there are bright spots on the horizon with new orders continuing to expand and production and finished stocks both rising at a faster pace than in August,” Mr Willox said.

“Manufacturers are hoping that the prospect of restrictions being wound back will see a strong lift in performance over coming months.”

Meanwhile, economists expect the boom in house prices will show further signs of coming off the boil when September figures are released later on Friday as affordability constraints start to bite.

The well-regarded CoreLogic home value index for September is due on Friday, which economists expect will show a further increase of at least one per cent, but smaller than the monthly increases seen earlier in the year.

In August, house prices were growing at their fastest annual pace since 1989.

The Australian Bureau of Statistics will also release its lending figures for August, which economists expect will show a modest fall of around two per cent, again after recent rampant demand for mortgages.

Surging house prices and strong demand for home loans in a low interest rate environment has started to unsettle Australia’s financial regulators, even though they say lending standards remain sound at this stage.

This week the regulators – the Reserve Bank of Australia, the Australian Prudential Regulation Authority, the Australian Securities and Investment Commission, and Treasury – warned they are looking at taking the heat out of the housing market through macroprudential measures.

The APRA plans to soon publish an information paper on its framework for implementing such policies.

The RBA has repeatedly said it will not use interest rates to cool the housing market.