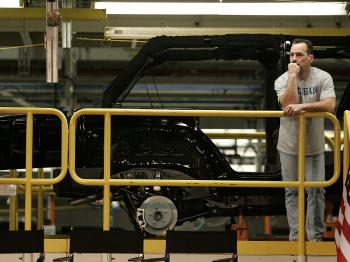 A worker at a Chrysler/Jeep factory in Toledo, Ohio, look over the plant floor. Chrysler closed all its plants for thirty days, to try to avoid bankruptcy. (J.D. Pooley/Getty Images)
Business & Markets

“The performance of the worldwide manufacturing sector through 2008 is the worst for a calendar year since 2001,” suggests the JPMorgan Global Manufacturing PMI report released this month. The PMI is the Purchasing Managers Index of the manufacturing industry’s economic health. The PMI analyzes five factors—new orders, levels of inventory, production, deliveries, and employment.

“Manufacturing activity continued to decline at a rapid rate during the month of December. The decline covers the full breadth of manufacturing industries, as none of the industries in the sector report growth at this time,” disclosed the Institute for Supply Management (ISM) in its report, released early January.

Factory orders from North and South America have dropped, as have orders from Europe. Orders from Asian companies have come to an abrupt halt.

Business orders for machinery from “Asia—particularly China—has virtually shut down,” according to the ISM Report.

The U.S. manufacturing industry was hit hard, “where production and new work received fell at the fastest rates in the 61-year ISM survey,” disclosed the JPMorgan report.

U.S. employment dropped, as about 42 percent of the surveyed manufacturing firms put employees on furlough while 13 percent said that they did hire a few extra hands.

December saw the "the largest over-the-month decline [in the workforce] since August 2001," the BLS said.

Metal production firms laid off a total of 28,000 employees and the transportation industry cut 21,000 jobs.

On a positive note, prices for raw materials—especially energy-related products used in the manufacturing process—dropped for almost half of the surveyed firms and only 9 percent of firms claimed to have faced higher costs.

Increases in revenues and profits were predicted by a large number of manufacturing managers in a recently released report by Bank of America (BofA).

More than 60 percent of the BofA respondents are confident that government intervention is a major step toward recovery. To keep or regain competitive edge, expansion and growth plans were slowed but not stopped, claimed 52 percent of the respondents.

International sales are still on the rise, but to a lesser degree than in the past five years, said CEOs in the BofA report. About one-third of respondents predict that the sagging economy will begin to reverse in the second quarter of 2009 and 40 percent see recovery beginning in the third quarter of 2009.

Consumers and businesses alike have been bombarded with economic predictions and reports claiming to represent investor sentiment.

“The urge to forecast must be as psychologically deep-rooted as our need for benchmarks, even though we know these make no sense,” said Andrew Freeman, a Risk Center economist. “A forecast creates an illusion of control, all the more powerful if the forecast can also be adjusted.”

Today's risk assessment and management is based on financial information instead of fostering and sustaining the “trust and confidence” of all those involved in the consumer process, according to the report.

“A survey, rating or benchmark comparison may be as much an illusion as a ‘forecast.’ Too often they substitute for the hard thinking that we should be doing for ourselves,” said Freeman in the Risk Center article.