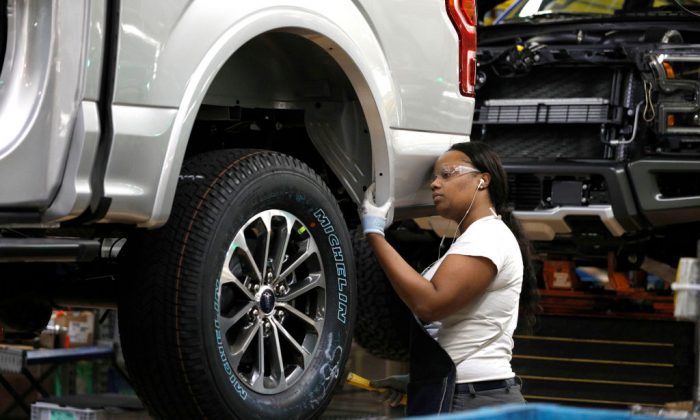 A Ford Motor Company worker works on a Ford F150 truck on the assembly line at the Ford Dearborn Truck Plant in Dearborn, Michigan, on Sept. 27, 2018. (Bill Pugliano/Getty Images)
US News

WASHINGTON—The manufacturing sector is growing at a good pace in the United States, playing a key role in the economic growth of Midwestern states.

Real gross domestic product (GDP) advanced in all 50 states and the District of Columbia in the second quarter, according to the data released by the U.S. Bureau of Economic Analysis on Nov 14.

Second-quarter economic growth at the state level ranged from 2.5 percent to 6 percent, with Texas, Michigan, Missouri, Minnesota, and Colorado capturing the top five spots in the rankings.

Texas, the fastest growing state with a 6 percent annual GDP growth rate, was buoyed by expansion in durable goods manufacturing and mining.

Durable goods manufacturing, one of the leading contributors to economic growth nationally, expanded by 7.3 percent. The sector was the leading contributor to growth in Michigan and Missouri—the second and third fastest-growing states. Manufacturing was also one of the key drivers of growth in other Midwestern states such as Minnesota and Kansas that ranked fourth and seventh in GDP growth.

President Donald Trump’s tax-reform and pro-business policies at the state level have helped boost economic growth in Missouri, she added.

The U.S. economy had a blockbuster second quarter, with GDP surging 4.2 percent, its fastest pace since 2014. Strong consumer and business spending, as well as a surge in exports, buoyed economic growth in the period.

According to the “advance estimate” by the Commerce Department, the economy expanded at a 3.5 percent annual rate in the third quarter. While the reading came lower than the 4.2 percent pace in the second quarter, it still marked the strongest back-to-back quarters of growth since 2014.