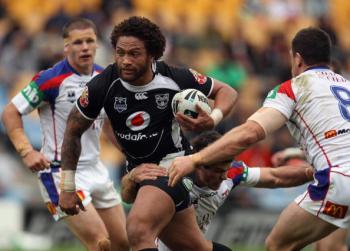 Manu Vatuvei of the Warriors makes a break during the round 23 NRL match between the Warriors and the Newcastle Knights at Mt. Smart Stadium on August 15, 2010 in Auckland, New Zealand. (Hannah Johnston/Getty Images)
News

Manu Vatuvei to Stay a Warrior

Nick Mclaughlin
View profile
Follow
biggersmaller
Print
New Zealand Warriors star winger Manu ‘The Beast’ Vatuvei has re-signed for another two seasons on top of his existing contract and will be at Mt. Smart stadium until the end of the 2013 season.

Warrior’s fans can breathe a sigh of relief with their favourite player staying in Auckland, following his announcement at a press conference at Mt. Smart Stadium, August 24.

Vatuvei said his family were really important in his decision to stay in Auckland, he said. “Now I’ve got a family of my own, and another one on the way, it was really important. I just wanted them to be happy where they are and I don’t want to move somewhere that they didn’t want to go.”

The massive 115kg winger recognised for his prolific try scoring ability in the National Rugby League (NRL) competition has scored 17 tries in 16 games played this season, missing six games through injury. He is one of NRL’s biggest attractions on both sides of the Tasman.

The 24-year-old Vatuvei is just three tries away from passing club legend Stacey Jones’ record of 77 tries for the club. Vatuvei has played 110 games for the Warriors and has scored 75 tries.

“It would be great to beat [Jones’] record … he is a legend in the game and for myself to beat his record will be a great accomplishment for myself, so I will be really happy with it.”

Born in Otara, Auckland, Vatuvei has played his whole NRL career for the Warriors, and is up there in popularity with Otara’s other favourite son, Vatuvei’s good friend and mentor, Ruben Wiki.

Vatuvei was named in the NRL All Stars team at the beginning of the year, and has also been approached by NFL clubs in America.

The contract will see him become the third player to complete 10 years at the club, after Stacey Jones and Awen Guttenbeil.

“It will be a dream come true, I never thought that I would make it that long at one club,” he said.

Vatuvei will be an automatic selection for the Kiwi’s four nations campaign at the end of the season, featuring Australia, England, and Papua New Guinea. A feature of the tournament will be a double-header at Eden Park on Saturday, November 6, with England playing PNG, and the Kiwi’s up against archrivals, Australia.