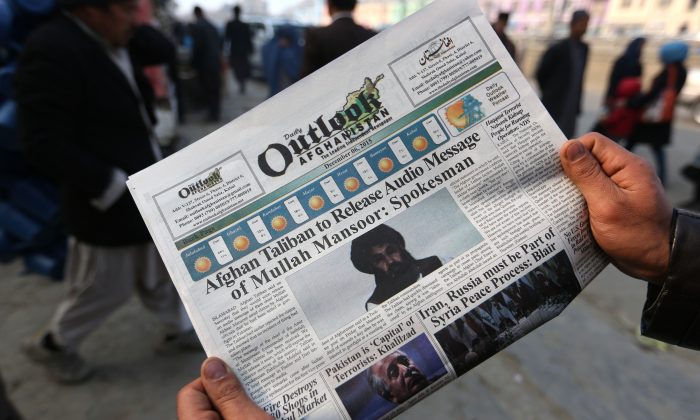 An Afghan man reads a local newspaper with photos of the leader of the Afghan Taliban, Mullah Mansour, in Kabul, Afghanistan, on Dec. 6, 2015. The Pentagon has announced that the U.S. has conducted an airstrike targeting Taliban leader Mullah Mansour. A U.S. official who wasn't authorized to publicly discuss the operation said Mansour and a second male combatant accompanying him in a vehicle were likely killed. (AP Photo/Rahmat Gul)
Middle East

ISLAMABAD—Mullah Mohammed Akhtar Mansour’s brief rule, which ended with his death in a drone strike, was marked by mistrust and strife.

Since his takeover of the movement following the announcement last year of founder Mullah Mohammed Omar’s death, Mansour had battled other Taliban commanders. He eventually enlisted the powerful semi-independent faction known as the Haqqani network to cajole important commanders back into the fold and promised positions on the leadership council to entice Mullah Omar’s family to his side.

So divisive was Mansour’s rise to the leadership of the Taliban that at the meeting announcing his ascendance, several of the movement’s top commanders stormed out, according to one Taliban official familiar with the proceedings, but who didn’t want to be identified because of orders not to speak independently to the media.

Tayyab Aga, a close ally of Omar’s and a former peace negotiator on behalf of the Taliban, refused to swear allegiance to Mansour. In a statement following the announcement that Omar had died two years earlier, Aga accused Mansour of hiding the founder’s death in order to secure his power at the helm.

Meanwhile Mansour set about trying to buttress his position, appointing as his main deputy, Sirajuddin Haqqani, the head of the Haqqani network, which is considered by both Afghanistan and the United States as the strength behind the Taliban. Bringing in the Haqqanis added both manpower and military sophistication to the Taliban operations.

It took several months and bloody battles inside Afghanistan between warring Taliban factions before a semblance of unity was brought to the movement. Under the guiding hand of Haqqani, several key commanders agreed to support Mansour, but some also made their support conditional—demanding Mansour reveal the circumstances around Mullah Omar’s death.

Since the 2001 ouster of Mullah Omar and the Taliban by a U.S.-led military coalition, the Taliban founder was seen only by a handful of followers, including Mansour. This recently caused some within the movement, including Aga, to speculate that Mansour had intentionally concealed Mullah Omar’s death. Mansour was openly accused by several within the Taliban of manufacturing recordings by Omar and issuing orders using his name.

When the Taliban ruled Afghanistan between 1996 and 2001, Mansour held several positions in the government.

In 1999 when the United Nations imposed wide-ranging sanctions on the movement, Mansour was both aviation minister, trying to keep the national airline operating without spare parts, and military commander in the Taliban stronghold of Kandahar.

Among the Taliban leaders at the time, Mansour was considered among those closest to Mullah Omar and like the Taliban founder, Mansour rarely travelled to Kabul—instead running his Aviation Ministry from the southern city of Kandahar.

Mansour was a member of Afghanistan’s powerful Ishaqzai tribe in Kandahar, the spiritual headquarters of the Taliban. His tribal affiliation speaks to his significance as an ethnic Pashtun, whose members comprise the backbone of the Taliban.

Critics of Mansour also accused him of being close to Pakistan’s intelligence agency, known by its acronym ISI.

His death has some hoping that the new Taliban leadership will be more open to peace overtures from the Kabul government. Under Mansour, the Taliban refused to negotiate directly with Kabul and largely ignored a four-country effort—involving Afghanistan, Pakistan, China and the United States—to bring peace to Afghanistan.

“Peace is what we want. Mansour was a threat to that effort,” U.S. Secretary of State Jon Kerry said Sunday during a visit to Myanmar. “It is time for Afghans to stop fighting and to start building a real future together.”

Gen. Joseph Votel, the top commander of U.S. forces in the Middle East, said Sunday that the Taliban are at a crossroads.

Votel, speaking during a visit to Amman, Jordan, said the Taliban are on “the horns of a dilemma” as they determine their post-Mansour leadership and direction.

A Look at Deadly Attacks Carried Out Under Mullah Mansour

May 25, 2015: The Taliban launch a deadly attack on Afghan Security forces in southern Helmand province, killing 19 police and seven soldiers.

June 22, 2015: The Taliban launch a coordinated assault outside the Afghan Parliament in the capital, Kabul. A vehicle packed with explosives blew up outside the Parliament gates and six Taliban armed with Kalashnikovs and rocket propelled grenade launchers laid siege until they were killed by Afghan Security Forces. Two civilians were reported killed and several others injured.

July 7, 2015: The Taliban stage two separate suicide bombings in Kabul, killing at least one person and wounding three, including a NATO soldier.

Sept. 14, 2015: More than 350 inmates escape after an attack by Taliban insurgents on the main prison in eastern Ghazni province.

October 2015: The Taliban stage a coordinated strike on Kunduz, surrounding the city, forcing Afghan government forces out and taking control of the city. It was the first time the Taliban took an Afghan city since being ousted from power in 2001. The Taliban held on to the city for four days, eventually being driven out by Afghan Security Forces backed by U.S. air strikes.

Jan. 5, 2016: A U.S soldier is killed and another two injured in battle in Helmand province between Afghan National Security Forces and the Taliban.

April 19, 2016: In one of the deadliest attacks on Kabul, a suicide bomber backed by heavily armed militants kills 64 people and wounds hundreds more.