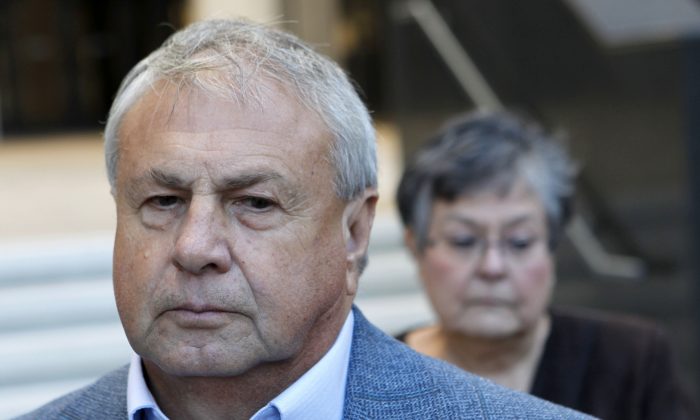 In a Wednesday, Nov. 28, 2012 file photo, Donald Vidrine, a BP well site leader from the Deepwater Horizon oil rig explosion, stands with his attorneys outside Federal Court after being arraigned on manslaughter charges in New Orleans. (AP Photo/Gerald Herbert)
Environment

But the Justice Department’s decision to drop manslaughter charges against two BP rig supervisors makes it increasingly likely that nobody will spend a day behind bars for crimes associated with the deadly disaster.

One of those rig supervisors, Donald Vidrine, pleaded guilty Wednesday to a misdemeanor charge of violating the Clean Water Act after a judge agreed to dismiss 11 counts of involuntary manslaughter against him and Robert Kaluza.

The cases against two other former BP employees already have been resolved — one with an acquittal and another with a sentence of probation.

Keith Jones, whose son Gordon Jones died in the rig explosion, attended Wednesday’s hearing with his other children and expressed disappointment that prosecutors dropped the most serious charges against Kaluza and Vidrine.

“As a result of this court proceeding today, no man will ever spend a moment behind bars for killing 11 men for reasons based entirely on greed,” Jones said.

The Justice Department launched a sweeping and costly criminal investigation after the April 2010 rig explosion. For roughly two years, a task force of FBI agents and prosecutors occupied an entire floor of a high-rise building across from the federal courthouse in New Orleans.

The government did secure a landmark criminal settlement and record civil penalties against the energy giant, which BP said would cost the corporation billions of dollars. But in terms of individual criminal responsibility, only four mostly lower-ranking employees faced charges, and even those cases unraveled before skeptical jurors and judges.

Shaun Clarke, a lawyer for Kaluza, said his client will fight the same remaining charge of violating the Clean Water Act at a trial scheduled to start in February.

“From Bob’s standpoint, he’s charged with a crime he didn’t commit, and he’s going to go to trial to clear his name,” said Kaluza’s attorney, Shaun Clarke.

Former BP executive David Rainey was acquitted in June of manipulating calculations to match a far-too-low estimate of the amount of oil spewing into the Gulf. A judge dismissed a related charge, that Rainey obstructed a congressional investigation of the spill.

Former BP engineer Kurt Mix was convicted of obstruction of justice in 2013 for deleting a string of text messages, but allegations of juror misconduct led a judge to order a new trial, and Mix ultimately cut a deal with prosecutors, who agreed to drop the obstruction charge punishable by up to 20 years in prison. Mix pleaded guilty last month to a lesser charge and was sentenced to six months of probation.

Anthony Badalamenti, a former manager for Halliburton Energy Services Inc., BP’s cement contractor on the rig, was sentenced to one year of probation after pleading guilty to a misdemeanor: destroying evidence in the aftermath of the spill.

The Deepwater Horizon rig, which London-based BP PLC leased from Swiss-based Transocean Ltd., was about 48 miles from the Louisiana coast at the time of the deadly blast. Residents up and down the coast watched in horror as the spill continued for nearly three months, coating birds, fouling beaches and spoiling delicate fishing areas.

This summer, the global energy giant agreed to a record settlement of nearly $20 billion to states affected by the spill, hoping to resolve the legal drama that has cost the company billions. At the time, the company said the settlement would bring its full obligations to an estimated $53.8 billion. The company also agreed to plead guilty to manslaughter and pay $4 billion in criminal penalties.

Three years ago, then-Attorney General Eric Holder traveled to New Orleans to announce that deal as well as the charges against Rainey, Vidrine and Kaluza, whose lawyers swiftly portrayed them as scapegoats.

“There clearly was no evidence to support any of the charges brought against any of the individuals,” said Joan McPhee, one of Mix’s attorneys.

Cleaning Up Massive Oil Spills, How Do They Do It?

Prosecutors have said Vidrine and Kaluza botched a key safety test and disregarded abnormally high pressure readings indicating signs of trouble ahead of the blowout. Vidrine is scheduled to be sentenced April 6. U.S. District Judge Stanwood Duval Jr. did not indicate whether he will accept the sentence recommended by prosecutors, which includes 10 months of probation, 100 hours of community service and $50,000 in restitution for a project to fix damage from the oil spill.

Justice Department spokesman Peter Carr said in a statement that prosecutors dismissed the manslaughter charges “because circumstances surrounding the case have changed since it was originally charged, and after a careful review the department determined it can no longer meet the legal standard for instituting the involuntary manslaughter charges.”

To convict on involuntary manslaughter, prosecutors would have had to prove that Kaluza and Vidrine acted with a “wanton or reckless disregard for life.” David Uhlmann, a University of Michigan law professor and former chief of the Justice Department’s environmental crimes section, said it would have been “extremely difficult” for prosecutors to meet that burden of proof. Seaman’s manslaughter required mere negligence.

“The problem in the Gulf oil spill is not that the government tried to hold individuals responsible,” Uhlmann said. “The problem is that the responsibility lies with the senior corporate management that created a corporate culture that promoted risk taking and did not place sufficient emphasis on safety and environmental protection.”