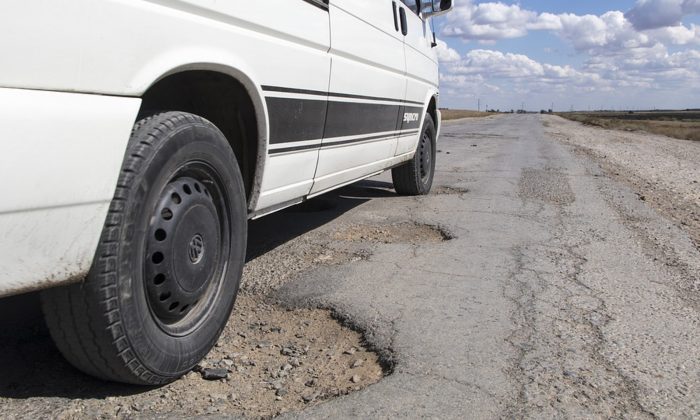 Stock image of a pothole. (Odejacob/Pixabay)
US News

In a rare case, a Nebraska man’s life was saved on April 15 when his ambulance hit a pothole and his dangerously paced heartbeat returned to normal.

The incident happened when Gretna paramedics rushed a 59-year-old man with a life-threatening heartbeat to the hospital, reported 6 News.

The ambulance had traveled 7 miles and was 20 miles away from the Lakeside Hospital when it hit a pothole. At one point during the journey, the man’s heartbeat had hit a dangerous rate of 200 beats per minute.

What if we told you that not all potholes are bad? It’s true. One man may have a pothole to thank for saving his life. https://t.co/CXcDb6jSTU

“It’s rare, but it’s a well-described phenomenon,” Nebraska Medicine’s Dr. Andrew Goldsweig told 6 News. Goldsweig was not in the ambulance and was not the physician in the case but helped 6 News understand the rare phenomenon.

“One way to treat that is with an electrical shock. Classically, you’ll see it on television. The paddles, ‘Clear’ and a big jolt. Turns out, you can do that with a pothole,” Goldsweig said.

He said that he had heard of a similar case where a speedbump jolted a man back to a normal heartbeat in the 1970s.

A lot of people hate potholes, but one may have saved a Nebraska man’s life: https://t.co/MgBrBe7LgP pic.twitter.com/z0hW3uzcT3

Abnormal heartbeat is called arrhythmia and it is dangerous because it can prevent normal circulation of the blood to the heart and brain.

It can be cured by procedures called cardioversion, according to heart.org.

In the case of electrical cardioversion, patients are put to sleep so that they don’t feel the shock.

In this rare medical case, the pothole was a blessing and saved a man’s life, however, potholes also cause accidents, deaths, and economic damages.

Potholes are caused by wear and tear to the road by water, freezing, and excessive heat. The areas most prone to potholes are those with poor drainage and where the vehicular traffic is high.

https://t.co/UHNbpE1aPh
Every year potholes cost American drivers $3Billion, damaging your tires, suspension and even more. Routine monitoring can avoid long term headaches. For all of your tire needs go to the “Pros.” https://t.co/uca60fbEpo pic.twitter.com/AhwVCRK5eb

Every individual motorist in the United States needs to spend $377 annually on vehicle repairs due to potholes, according to pothole.info

Pothole.info says that failure to spend $1 in road repair results in a cost of $7 after five years.

As spring emerges, potholes often blossom and create risks to your tires. How to be proactive with maintenance: https://t.co/f2PIaLl4e9