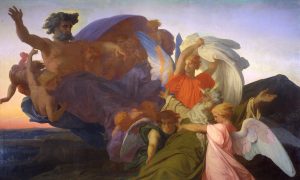 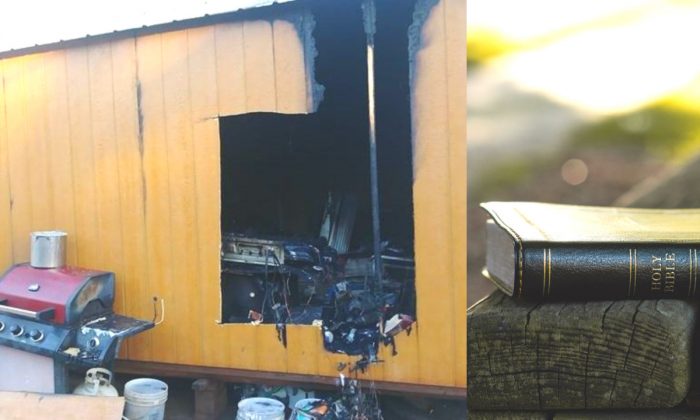 A man in Tyler, Texas, said that his personal Bible had survived after his tiny home and almost everything inside it was destroyed by a fire on Dec. 28., 2018. (L: GoFundMe/Charles House. R: Aaron Burden/Unsplash)
US News

A man in Tyler, Texas said that his personal Bible had survived after his tiny home and almost everything inside it was destroyed by a fire on Dec. 28.

When the tiny house owner Charles House returned to the rubble to see what was left to salvage, he found his Bible sitting on a charred side table, barely affected by the flames.

“He said His word would not perish, and the Bible did not burn,” House said, according to KLTV. “It was scorched but it did not burn. That Man’s word is real.”

House added: “You can take it away, but you can never stop His word. I’m a witness to that right now. Seeing that Bible, in the middle of that fire … it didn’t burn that Bible.”

House had woken up to a smell of smoke that he couldn’t identify at the time.

“I looked up and my whole bedroom was on fire,” House told the TV station. “All I could do was just jump up and run out the house.”

Firefighters were called at about 4:30 a.m.

House’s had converted a storage building into a tiny home as he was saving money for a larger place.

He said he almost passed out trying to leave. But nobody was hurt.

“It’s fortunate I got myself out of there,” House told KLTV. “It’s a blessing; I can’t stop saying that because it’s a blessing. Thank God.”

The Tyler Fire Marshal’s Office said hazardous wiring caused circuits to overload and spark the fire, according to KLTV.

House has started a GoFundMe page and is asking for donations to help himself recover from the losses caused by the fire.

“I was living in a storage building while looking for me a house,” he wrote.

“Unfortunately, the building caught on fire with all of my things in it.

“I’m a [disabled] man trying to find me a place to stay & recover the important things I lost.”

“The same thing happened to a friend of mine in Kentucky the house was a total loss the only thing that survived was her Bible unscathed (no one was home),” one person who donated had written on the GoFundMe page.

“A plucky Bible is a good sign of a man’s character,” another person wrote.

The story of House’s Bible having survived the flames is reminiscent of an earlier fire incident which took place on Oct. 24, 2018, when a painting of Jesus survived a fire that destroyed a historic church in the small town of Wakefield, Massachusetts.

One of the very few artifacts to survive the fire was a painting of Jesus that hung by the front door of the church. Despite the intense heat, the smoke, and all the water from the firemen’s hoses, the painting suffered no damage at all.

A painting that shows Jesus Christ wearing a white robe, holding out his hands that show the holes where nails were driven through his palms, had a few drops of water on it, Fox News reported.

“It’s a beautiful sign of hope and a reminder that Jesus is with us,” church member Maria Kakolowski told Boston 25.

Chris Jasurek contributed to this report.