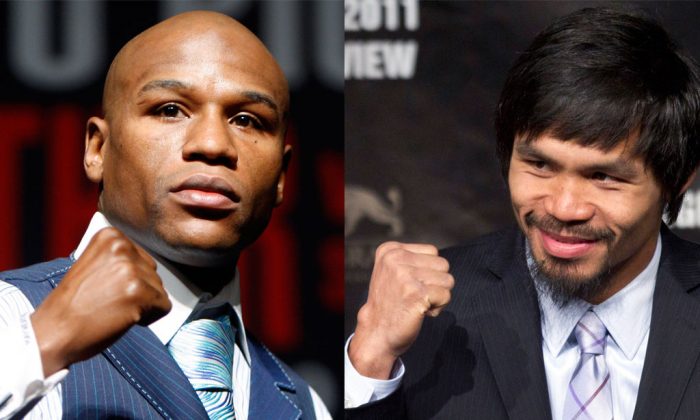 Left: Floyd Mayweather Jr. in Las Vegas in April 2010. (AP Photo/Isaac Brekken) Right: Manny Pacquiao in Las Vegas on May 4, 2011. Promoter Bob Arum said Wednesday, Jan. 14, 2015, that Pacquiao has agreed to all terms for what would be boxing's richest fight ever, a bout with Floyd Mayweather Jr. that fans have been demanding for five years. (AP Photo/Julie Jacobson)
International

After roughly six years of negotiating, the mega-bout that would be Manny Pacquiao (57–5, two draws, and 38 knockouts) versus Floyd Mayweather (47–0, 38 knockouts) is nearly a done deal—that is, depending on who you talk to.

Boxing fans have clamored for the titanic matchup for years and with both fighters getting up in age (Pacquiao is 36, Mayweather is 37) the time is now for it to happen.

But, that’s been the question for a number of years now. Still we ask, will it happen?

Pacquiao seems to think so.

Though Mayweather denied it was a done deal to TNT sideline reporter David Aldridge Sunday night in New York at the NBA All-Star Game, Pacquiao said Monday it was close to happening, according to a report courtesy Agence France-Presse. “(The fight) is near. The negotiations are nearly finished,” said Pacquiao. “We agreed that this fight has to happen. We are ironing out the kinks. He (Mayweather) said he wants the fight to push through.”

Among some of the reasons the fight hasn’t yet happened is the money. Reportedly Mayweather, in the past, wanted a larger share of the revenue, as such a fight would command a outrageous purse. Reports have suggested it could be as high as $250 million.

Another yet-to-be agreed upon point is the pre-fight drug-testing. Mayweather has reportedly demanded “strict Olympic-style drug screening that would require blood tests 30 days before the fight, instead of a few days,” AFP reports.

Pacquiao said he agreed to it and then some. “We agreed to their demand. In fact, I suggested a $5 million fine if I test positive for drugs,” said Pacquiao.

The venue isn’t a done deal either, though, according to a report on the MailOnline, the fight could take place on May 2 in Las Vegas. However Pacquiao promoter Bob Arum has suggested Dallas’ AT&T Stadium, as a destination in the past—which could seat up to 105,000 people (including standing room).

Even the rival television deals have yet to be worked out as Pacquiao has a deal HBO, while Mayweather is with Showtime.

Either way it’ll be TV history…however, who’s the favorite?

“Mayweather is certainly the favorite, I think we can expect that, and it will be up to Pacquiao to be able to change the perception of that. I think if it happens, it will be a very interesting fight,” boxing analyst Al Bernstein told ontheropesboxing.com.

“Pacquiao, for him to be effective, he needs to throw a lot of combinations, throw volume punches which is very hard to do against Mayweather. Mayweather tends to turn volume punchers into non-volume punchers and of course if he can do that against Pacquiao, he’s got a much better chance of winning the fight,” said Bernstein.

“For Mayweather, he wants to stay in the center of the ring and I think the key element for him is the right hand. He can land the straight right with great impunity and Pacquiao could be hit with that punch. We’re gonna get a clue to where this fight’s headed early in the fight because we’ll find out if Mayweather can hurt Pacquiao at all with that right hand. If he can’t, then Pacquiao may be able to walk through it and land a lot of combinations.”