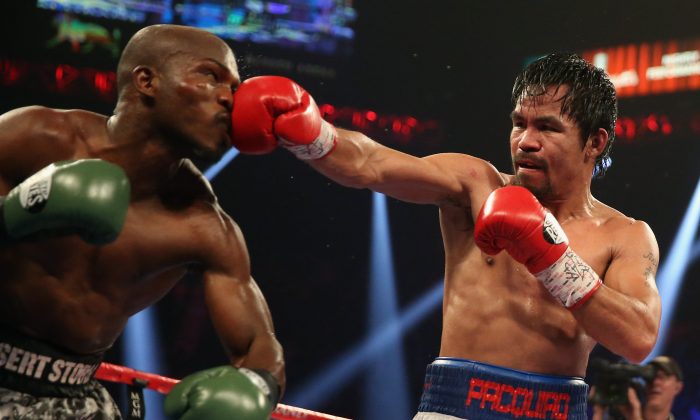 The rumored Mayweather vs Pacquiao fight would likely see total revenues of up to or even over $300 million, says a report this week.

A fight between Manny Pacquiao and Floyd Mayweather Jr. was supposed to happen in March 2010 but the bout never happened. It’s heavily debated what scuttled the fight but both sides accuse each other of making too many demands, such as intense drug testing.

But recently a source told Boxing Insider that Floyd Mayweather Sr. has told the source that Team Mayweather wants to fight Pacquiao in May 2015, and that those plans are the “big surprise” that his son was talking about.

“Just the fact that the father is pushing for the fight is significant, but the source said that since then he’s seen other indications that the rest of the team is on board,” the blog said.

Citing documents and experts, Yahoo said in reference to the planned 2010 fight that total revenues could reach $300 million, with experts predicting the fight would sell between 2.5 million and 3 million pay-per-views in the United States alone.

The source referenced the PPV number, saying: “I know Showtime will push for this fight. Where else can they get 2 million [pay-per-view] buys? Floyd is at a different level. He’s fighting for history.”

The projections could likely be updated a bit higher, over $300 million, because of the surging popularity of both fighters and the lack of other big draws in the boxing world.

The previous contract offered a 50-50 split between the fighters but that split may not be the same if this fight actually happens.

After Mayweather spoke negatively of Pacquiao earlier this year, Pacman dared Mayweather to fight for charity.

“I’m not desperate to fight him just for the sake of money or material things. I’m not the one seeking this fight; rather it’s the boxing fans all over the world,” Pacquiao told the Philippine Inquirer.

“Above all, I challenge him to include in our fight contract that both of us will not receive anything out of this fight. We will donate all the proceeds from the fight—guaranteed prize, should there be any, gate receipts, pay-per-view and endorsements—to charities around the world.”