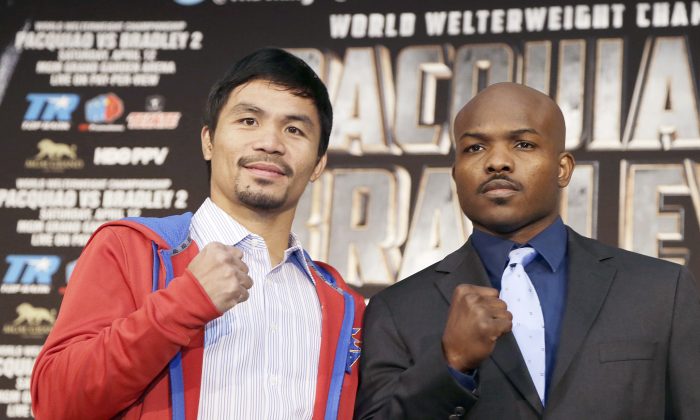 Manny Pacquiao is too strong and fast to knock down in sparring, said training partner and undefeated lightweight boxer Lydell Rhodes–ahead of Pacquiao’s rematch with Timothy Bradley in a few weeks.

Rhodes said that he was offered $1,500 by coach Freddie Roach to knock down Pacquiao, 35, during training, but it’s probably not possible, according to The Inquirer.

“The disparity in skills was obvious in their third sparring session that lasted six rounds Saturday at Pacquiao’s Wild Card Gym in General Santos City,” the paper wrote. “Each time Rhodes went  on attack mode, Pacquiao would  just spun around and leave the unbeaten American (19-0, 9 KOs) in an awkward stance and open for a crunching shot. Pacquiao, however, would  allow Rhodes to regain his balance before the Sarangani representative resumed his sparring session in preparation for his grudge rematch with Timothy Bradley on April 12 at MGM Grand in Las Vegas.”

A few days ago, Rhodes described the Philippine boxer as “a complete fighter,” and added that “he has the speed, power and brain.”

“He’s a flyweight who punches like a middleweight,” Rhodes said. “It is a great opportunity for me to work with Manny Pacquiao. His ring achievements and by just seeing how hard he trains for the fight motivates me.”

The news comes as ex-lightweight Ray “Boom Boom” Mancini said that Bradley could be “ripe for the taking” in the April 12 fight.

“Manny will beat Bradley,” Mancini said, according to Ring TV. “I thought he beat him the first time but Manny wasn’t sharp in that fight. But I think he’ll beat him easily. He knows now that he has to, it’s probably the thorn in his side.”

Mancini was one of a number of people who believed that Bradley lost the first, controversial fight against Pacquiao a few years ago. Bradley won via a judges’ decision.

“It made no sense,” he said of the outcome of the first fight. “You see, if Bradley was a draw, it makes sense, a big draw for Vegas or for the promoter. Bradley doesn’t draw two people, so it made no sense. I really don’t have a clue why that happened.”

But boxing writer Larry Merchant isn’t so sure, saying the bout is a “tossup.”

“You can’t say enough about Manny and where he was when he first came to America, and how he evolved as a boxer-puncher,” Merchant told RingTV recently. “In that fight, against Rios, he fought just as a boxer. But he’s not going to be able to beat Bradley just as a boxer. You can never dismiss a fighter of Manny’s proven qualities.”

Merchant noted that Pacquiao is getting up there in age.

“Tim Bradley is a younger guy and he still thinks that he’s got stuff to prove, and that’s what makes Bradley who he is,” Merchant added. “Bradley wins every place that he goes. If there is any resistance, he wears you out. He’s a damn good figher.”