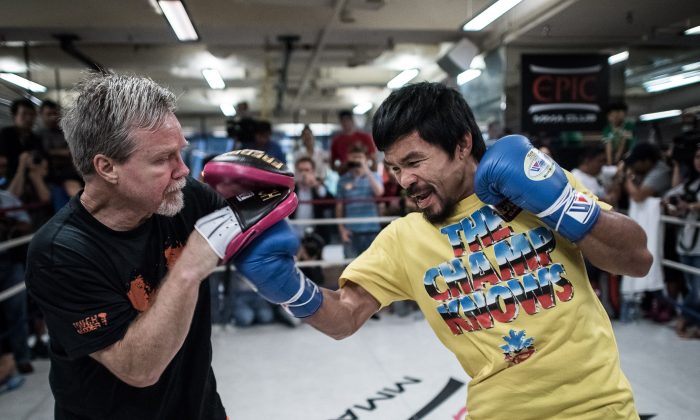 Manny Pacquiao says that he wants to fight Floyd Mayweather Jr. before he retires, possibly sometime next year.

But provided he wins, a number of fans and analysts believe that the long awaited Pacquiao vs Mayweather could happen in 2015.

Pacquiao’s side has been especially confident, alternating between saying negotiations are going smoothly and needling Mayweather with insults.

“If people don’t see that by now, they’re never gonna see it,” he added.

Pacquiao asserted this week that he has a lot left and has not set a date of retirement.

“As long as my skills and my passion remain strong I want to continue my boxing career. When I retire, I want it to be on my terms. I do not want to spend my retirement regretting that I walked away from boxing before I was ready. I do not want to come back and fight after I retire,” Pacquiao said.

“I have not set a date or determined an age when I will retire. As long as I can keep fighting at the level I expect from myself I will continue my boxing career.”

But he emphasized that his one goal before he retires “is to give the boxing fans the fight they have always asked for [with Floyd Mayweather Jr].”

“I want that fight too,” Pacquiao told Boxing Scene.

“I believe good faith negotiations could produce that fight. But it is impossible to negotiate when you are the only one sitting at the table. Two fighters who want to fight each other have never been kept from fighting each other.”

If Pacquiao is not able to beat Algieri, then both sides have a rematch clause built in. Arum made it sound like there could be a rematch even if Algieri loses.

“As far as if Chris Algieri wins the fight from Manny Pacquiao, then there is a provision in the contract for a rematch,” said Arum.

“And if he then beats Pacquiao and beats Manny in a rematch and Floyd wants to fight [Algieri], that’s not my business. That’s up to Joe DeGuardia, and it’s up to the Mayweather camp.”