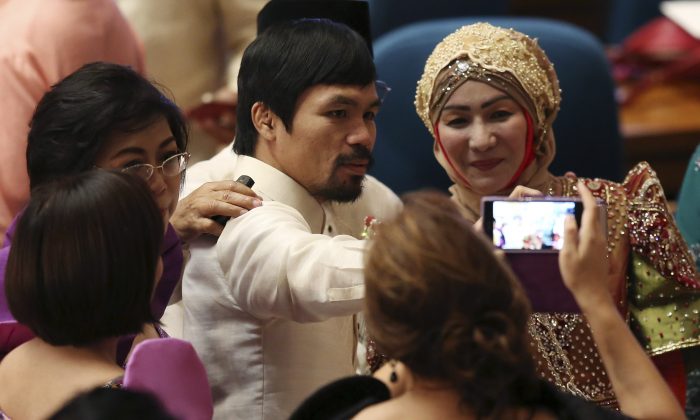 Philippine congressman and boxing hero Manny Pacquiao, top center, has his pictures taken with fellow representatives before the start of the 5th State of the Nation Address by President Benigno Aquino III during the joint session of the 16th Congress at the House of Representatives in suburban Quezon city, north of Manila, Philippines Monday, July 28, 2014. (AP Photo/Aaron Favila)
Sports

Manny Pacquiao’s next fight might not be as easy as he may think.

Pacman is set to face Chris Algieri on November 22 in Macau.

Ron Katz, a veteran boxing matchmaker, says that Algieri has some potential advantages.

“I love the matchup. I love the style matchup. I think Chris will use his physical advantages and I think his speed is going to surprise Pacquiao,” said Katz in an interview with Fighthype.com.

“I think Manny is still a very good fighter, there is no doubt about it, but he’s not the same Manny from three years ago.”

Algieri certainly has confidence–he recently said that he believes he’ll win, and that after he wins he wants to take on Floyd Mayweather.

Meanwhile, Boxing Insider is calling the fight a “lose-lose situation” for Pacquiao, because he’s supposed to win but there probably won’t be big pay-per-view numbers.

“At the end of the day, no oneenvisions Algieri as a serious threat. The ppv may not sell too well,” it said.

“What if the unthinkable happens and Algieri manages to score the upset? The hailstorm of criticism would be tremendous.”

If Pacquiao wins then there have been rumblings about a Pacquiao vs Mayweather bout in May 2015.

Amir Khan recently said that provided Pacquiao beats Algieri and if the bout against Mayweather doesn’t happen, then he’d like to take on Pacman.