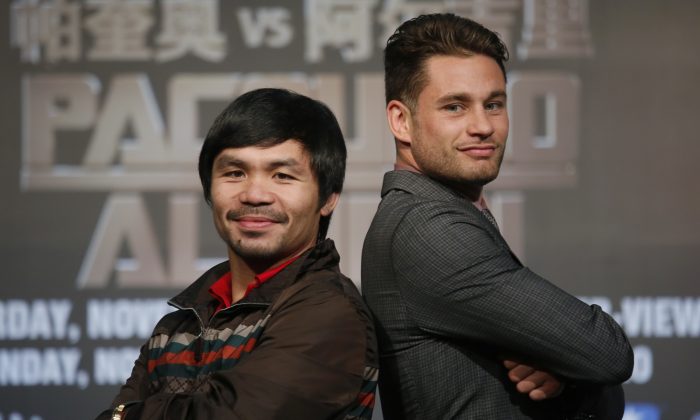 Manny Pacquiao next opponent, Chris Algieri, said that watching a Timothy Bradley fight will help prepare him against Pacquaio.

“Bradley is awesome. I think he’s a great fighter,” Algieri said, according to the Desert Sun. “He’s a good boxer, he’s shifty, he’s hard to beat and he’s just one of those guys who finds a way to win, kind of similar to the way I am in terms of, not style but approach and ability. He’s a gamer.

“With Tim and myself, I think there’s a five-inch height difference, but Tim is an athletic guy like myself. And there are certain things Tim does that exposed certain aspects of Manny’s style that I’m sure my coaches can figure out a way to take advantage.”

Algieri said he believes the fight will be an interesting matchup.

“I think it’s a great matchup. For people who don’t know who I am, it’s just interesting. It’s an interesting matchup by the numbers,” Algieri added. “You got a younger guy, an undefeated guy, a taller guy and an athletic guy. Just that way, it’s interesting. But on top of it, if you know who I am and you know the way I prepare for fights and how I mentally approach a fight, you know this is a God-(expletive) good fight.”

“He was thrown in the (first) Pacquiao fight, kind of in over his head — quote, unquote, people thought,” Algieri said. “He went out there and he performed and he ended up getting the win. It was a questionable decision, but nonetheless, that guy fought well. They fought 24 rounds and Tim did well.

“When Manny fights guys who give him different looks, he has trouble (like) Tim and (Juan Manuel) Marquez,” Algieri added. “Even Marquez is right there, but Marquez is a good counter puncher and smart. So those things have shown to give Manny (problems).”

“As a Christian, I’m giving an advantage,” he said. “But in a real fight, that’s different.”

“He threw everything,” Roach said of Pacquiao. “He’s a good [pool] player. He let [Algieri] have it. If they were playing for money, it would have different.”