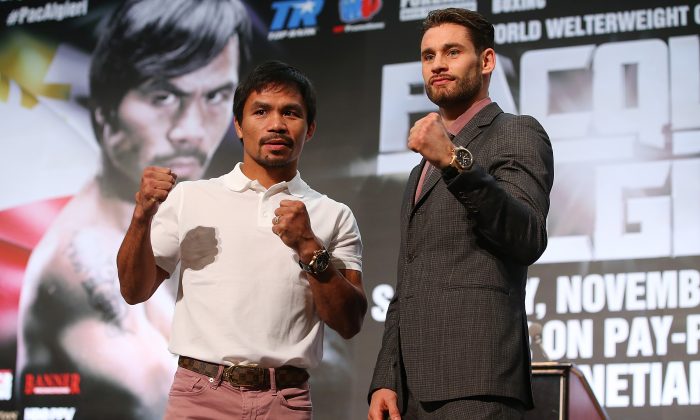 Manny Pacquiao and Chris Algieri pose during a press conference at The Venetian on November 19, 2014 in Macau, Macau. (Photo by Chris Hyde/Getty Images)
Sports

Chris Algieri says that he will beat Manny Pacquiao in their bout on November 22.

“I am more ready for this fight then I’ve been for anything else in my entire life,” Algieri said this week.

“We cannot wait to get out to Macau and handle business.”

“We’re going into this fight with victory in mind. I’m going out there to dominate and win every round,” he said. “When I beat Manny Pacquiao, this is just going to allow more people to see my passion, my desire, my drive, and I think it’s going to be good for the entire sport of boxing, not just my legacy.”

“Simply put I chose boxing because it’s the best sport in the world, it’s man vs man,” he told Bleacher Report.

“I’m absolutely not surprised where I am today. I’ve been training like a champion, like the highest-level athlete for the majority of my career, and the Manny Pacquiao fight is going to be my chance to show the world what I can really do. The door of oppourtunity opened up and I kicked that mother in.”

Algieri said that when he first heard his name linked to Pacquiao’s, he thought “It’s about time.”

Addressing his critics, Algieri says they don’t know who he is or that they’re “straight up haters.” He also leveled a dig at some of the boxers who have faced Pacquiao.

Meanwhile, a group of analysts got together for a roundtable preview.

“What’s amazing about this, when I stop to think about examples in history … light punching guy who outbozed a dominant, aging champion and won,” HBO commentator Max Kellerman said.

“And the narrative of boxing … you think that that [an upset] must happen a lot. It almost never happens in the history of boxing. And when it does it’s a heavyweight.”

“I’m not buying what Chris Algieri is selling,” added ESPN commentator Dan Rafael . “He’s  anice boxer, no disrespect whatsoever, but he’s fighting Manny Pacquiao, an all-time great. Manny Pacquiao is not nearly as done as some people have suggested.

“Chris is going to find out when he’s in the ring, that [Pacquiao] is no Ruslan Provodnikov.”

Kellerman noted that Pacquiao routed Timothy Bradley in the rematch.

“It is an interesting style match because of his length and his jab,” added ESPN commentator Brian Campbell.

“This is the whole fight, you’ll know it from early in the fight. If Algieri can establish his jab, because you say ‘how does a guy like Algieri beat Pacquiao if you can’t keep him off him,’ Algieri showed you against Provodnikov, when a guy lands that long, stiff jab, it knocks Provodnikov’s head back, it forces the opponent to take a half-step back to get back on balance, whether they like to or not, and then Algieri gets out of there,” Kellerman said.

“If he does that in the first round he has a shot, if not it’s not going to be a good night for Algieri.”