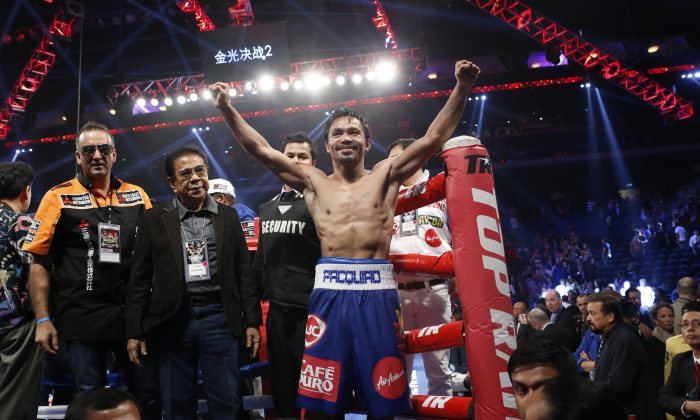 Manny Pacquiao and Floyd Mayweather Jr., who are rumored to finally be fighting sometime this year, have drawn renewed attention this week by both attending the Miami Heat game on Tuesday night.

The Heat are playing the Milwaukee Bucks in Miami.

Ethan Skolnick of Bleacher Report first reported Pacman’s presence, saying that he was hanging outside Miami’s locker room before the game.

He later noted Mayweather’s presence along with other reporters, noting that they were both put on a split screen on the video with the text: “Coming in 2015?”

In what appeared to be a joke, Chris Mannix of Sports Illustrated added: “This is great. Manny rushes Floyd, Floyd’s security breaks it up, and Erik Spoelstra–a fellow Filipino–whacks Floyd with a steel chair.”

In an apparently real encounter, Mayweather walked over to Pacquiao and engaged him in conversation. “Mayweather said he wanted to talk about all the lies,” reported Joseph Goodman of the Miami Herald.

Pacquiao and Mayweather have long jawed back and forth in person and over social media, and are supposedly close to finally fighting, but nothing has been concretely decided as of yet.

Not that Pacquiao/ Mayweather needs any PR but here we are https://t.co/P2qGP3NLDX

It’s on, tonight, here at AmericanAirlines Arena: Pacquiao vs. Mayweather . . . seated opposite each other for Heat-Bucks.

Mayweather said last month that he’s ready to make the fight happen May 2.

Pacquiao responded a few days later on social media, telling Mayweather that it’s time to “give the fans the fight they want.” In recent days, another tweet was posted to Pacquiao’s account where he said “I can easily beat @FloydMayweather, I believe that.”

Mayweather hasn’t lost in 47 fights. Pacquiao is 57-5-2 in his career. He has been in Miami for several days because he was judging the Miss Universe competition.

Pacquiao is a noted basketball fan and has a friendly relationship with Heat coach Erik Spoelstra, who is of Filipino descent. Mayweather has been a regular courtside attendee at Heat games for several years.