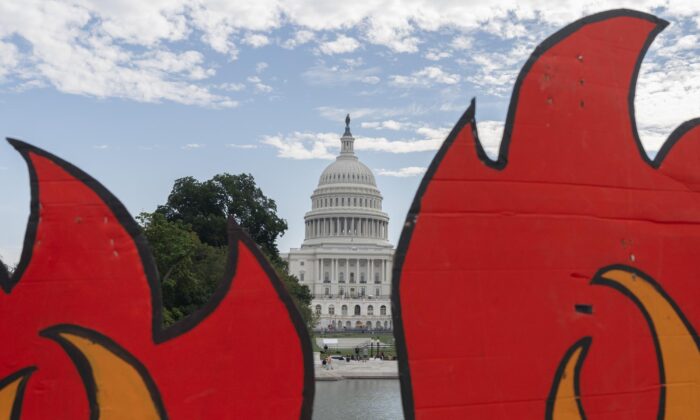 The U.S. Capitol seen between cardboard cutouts of flames during a climate change protest in Washington, on Oct. 15, 2021. (Jacquelyn Martin/AP Photo)
Viewpoints

Mankind Versus Climate: The Humans Are Winning

The human race has made immense progress in dealing with the reality of climate change. If you wish to characterize the ongoing collisions between mankind and climate as a war, humans are winning that war. It’s time to retire the phrase “existential threat” when discussing climate change. While there’s more yet to be done, many commendations are due for successful steps already taken. Schools should stop teaching gloom and doom to our children. It’s time for all of us to be optimistic about climate change.

You wouldn’t know this if you listen to the political establishment. That cozy club continues to crank out alarming projections. For example, on Feb. 25, the Biden White House released a slew of press releases from the “White House Climate Science Roundtable” warning of climate catastrophes if we don’t undertake a rapid, radical changeover from fossil fuels to intermittent (commonly called “renewable”) sources of energy. The Roundtable—a mixture of university profs funded directly or indirectly by government and political appointees—all tout the official party line. They seek “to cut U.S. emissions in half by the end of the decade, to reach 100% clean [sic] electricity by 2035, and to reach net-zero emissions by 2050.”

Meanwhile, many scientists outside the political establishment continue to downplay the alleged threat of catastrophic climate change. One example is research published in January in The European Physical Journal Plus. As The Heartland Institute summarizes the findings: “To sum up on ‘disasters,’ accumulated real-world data does not show cyclones, droughts, extreme precipitation events, floods, heat waves, hurricanes, or tornadoes have become more frequent or intense.” And as the European scientists themselves conclude, “on the basis of observational data, the climate crisis that, according to many sources, we are experiencing today, is not evident yet.”

Who are we to believe? Each person must decide for himself, but if you examine the agendas of the four key factions of the political establishment, you begin to realize that the proposed switch to intermittent (sorry, “renewable”) energy is often the means to an end having nothing to do with climate.

First, numerous political leaders have explicitly stated that the climate change issue provides them with a convenient pretext to achieve their overarching goal of imposing socialism.

Second, Wall Street, seeing that trillions of dollars are in play, is lining up with Team Biden to direct capital away from fossil fuel companies and toward producers of intermittent (sorry, “renewable”) sources of energy. Get ready to see more cronyism and corporate welfare than you’ve ever seen before.

Third, government-funded scientists have found that lending credence to climate alarmism has been highly profitable for them and their universities, bringing to mind President Dwight Eisenhower’s warning in his farewell address: “The prospect of domination of the nation’s scholars by Federal employment, project allocation, and the power of money is ever present and is gravely to be regarded” and there is a “danger that public policy could itself become captive of a scientific-technological elite.”

Fourth, journalists—many of them ideologically onboard with the socialist objectives and always conscious that scary stories are better for business than reports of benign stability—are all too happy to exploit climate alarmism for all it’s worth.

In sum, the four pillars of the climate change political establishment have found that the personal benefits of being alarmist include power, profits, prestige, and popularity. Might not those allurements influence their thoughts about climate change?

For those of you who still believe that it’s imperative that we transition to intermittent (sorry, “renewable”) energy sources, I have bad news and good news.

The bad news for you is there are two insurmountable reasons why this transition cannot be made. One is cost. According to Bjorn Lomborg writing in The Wall Street Journal, “The largest database on climate scenarios shows that keeping temperature rises to 2 degrees Celsius—a less stringent policy than net zero by midcentury—would likely cost $8.3 trillion … every year by 2050” with costs continually increasing “so that by the end of the century taxpayers will have paid about $1 quadrillion.” One quadrillion dollars? The global GDP today is barely one-tenth of that. There is no possibility that a whole decade’s worth of production will be spent in the attempt to shave a degree or less off the average global temperature. This would inflict massive and often lethal impoverishment on the human population. It would literally be a genocidal policy course.

The other reason net-zero won’t happen is because of insurmountable physical limitations. As physicist/researcher Mark Mills points out, there exists only a fraction of the capacity to produce the quantity of minerals needed to build a completely intermittent (sorry, “renewable”) energy infrastructure.

But here’s the good news, both for those who believe we must wean ourselves from fossil fuels and for everyone else: We are already winning the “battle” against climate. Even as CO2 concentrations in the atmosphere have been steadily rising over the last century or so, the death toll from climate/weather events has been steadily falling. You can read the specifics and see the decline depicted in graphs here and here. Indeed, “the global climate-related death risk has dropped by over 99% since 1920.”

The aforementioned European Physical Journal Plus article states, “global average mortality and economic loss rates … have dropped by 6.5 and nearly 5 times, respectively, from 1980–1989 to 2007–2016.” The key to this great progress is growing levels of wealth. It’s encouraging to note that progress toward lower climate-related death rates is not confined to rich countries. Bangladesh, for example, since 1970 “has lowered storm fatalities by a hundredfold while the frequency of destructive cyclones has increased,” according to the Christian Science Monitor.

By all means, let us continue to study and try to learn more about our climate. We humans will never be able to regulate our climate (even if CO2 emissions are stabilized, we won’t be able to control ocean currents, cloud formation, volcanic activity both on land and undersea, variations in solar radiation, etc.). But we have proven very resourceful in finding ways to minimize the damage from climate/weather-related events. We are winning. Let us celebrate rather than cower in fear.