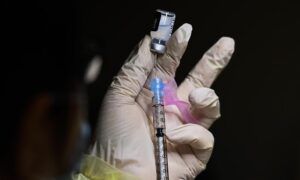 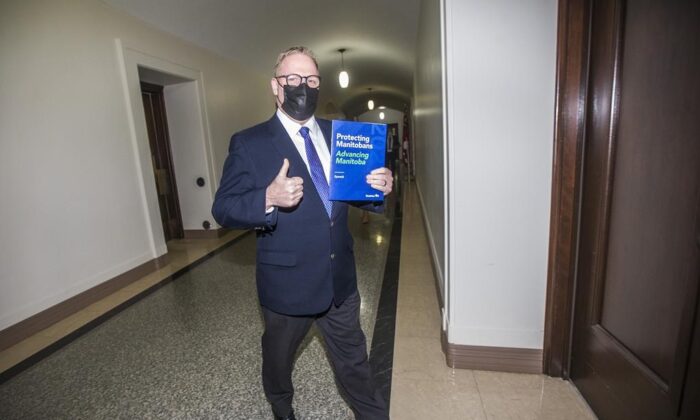 Manitoba finance minister Scott Fielding walks in to speak to the media about the 2021 budget at the Manitoba Legislative Building in Winnipeg on April 7, 2021. (THE CANADIAN PRESS/Mikaela MacKenzie - POOL)
Canada

WINNIPEG—Many Manitobans will soon be paying less in property tax while forking out more to use online digital services.

“Our plan is to really protect Manitobans through COVID-19 and advance the provincial economy past the pandemic,” Finance Minister Scott Fielding said.

The budget includes the first step in a plan to phase out education taxes on property and instead fund schools directly from provincial coffers.

Residential and farmland owners are to receive a 25 percent rebate this year, while owners of commercial and other land are to get a 10 percent rebate. The rebates are to be cut again by equal amounts next year, resulting in total savings of $1,100 for the average homeowner, the government said.

The province also plans to cut vehicle registration fees by 10 percent as of July and is to eliminate the provincial sales tax from spa and salon services starting in December.

Taxes elsewhere, however, are increasing. Digital streaming services such as Netflix and Spotify can expect to be subject to the provincial sales tax as of Dec. 1, as will online accommodation bookings through companies such as Airbnb. The move brings Manitoba in line with most other provinces.

Online marketplaces such as Amazon and Best Buy will have to start collecting provincial sales tax on items sold by third parties as of Dec. 1. They are already required to collect the tax on items they sell directly. Used items sold privately by individuals through sites such as Kijiji will continue to be exempt.

“We think there’s an advantage in levelling the playing field with local suppliers,” Fielding said.

The Tories are also promising more help for health care and the economy as the COVID-19 pandemic continues.

More than $62 million is being committed to boost job creation and workforce training, Fielding said. Some $25 million is to be put up to help employers hire students and young adults.

A day before the budget, Fielding promised $1.2 billion in COVID-19 spending for things such as protective equipment and extra staffing at vaccination centres.

To help renters, the guideline for increases in rent-controlled units will be zero in 2022 and 2023, following a 1.6 percent increase this year. Landlords who want to raise rents above the guideline must demonstrate that the guideline amount would not cover cost increases they face.

The budget’s extra spending and the ongoing economic impacts of the pandemic are predicted to result in a $1.6-billion deficit this fiscal year on total spending of $19.4 billion. It’s the second-highest deficit in the province’s history, behind last year’s $2-billion mark.