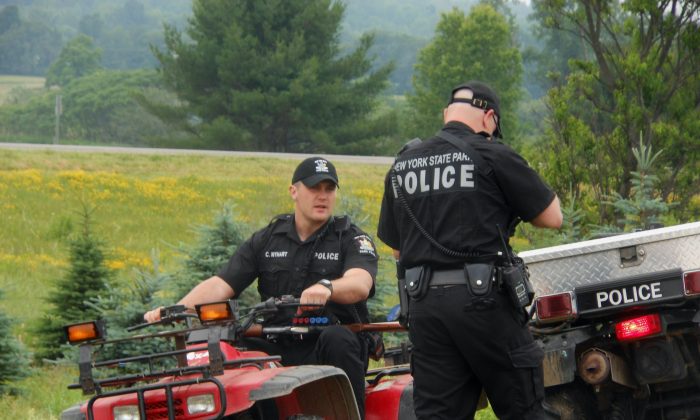 Authorities speak to one another during a search for two prisoners that escaped Clinton Correctional Facility two weeks prior, Saturday, June 20, 2015, in Allegany County, N.Y. (Kathryn Ross/The Wellsville Reporter via AP)
Crime and Incidents

FRIENDSHIP, N.Y. — Investigators tracking two murder convicts who escaped from a northern New York prison scoured a rural area near the Pennsylvania border Sunday, saying an unconfirmed but credible report of a sighting had shifted the search across the state.

Hundreds of law enforcement officers walked railroad tracks and checked car trunks as a helicopter flew back and forth over the town of Friendship, where state police said a woman on Saturday reported spotting two men who resembled the convicts near a railroad line that runs along a county road.

We will search under every rock, behind every tree and structure until we are confident that that area is secure.
— Michael J. Cerretto, State Police Maj.

While state police called the sighting unconfirmed, the intense hunt that had focused for two weeks around a prison near the Canadian border was quickly refocused on a rural, mountainous area 350 miles away, dotted with sheds, trailers, summer homes and other potential hideouts.

“We will search under every rock, behind every tree and structure until we are confident that that area is secure,” State Police Maj. Michael J. Cerretto said at a news conference Sunday.

Concentrating in the area along County Route 20 and Interstate 86, officers set up roadblocks and deployed search dogs. At one point, state police outfitted in camouflage could be seen heading into some woods.

David Sweat and Richard Matt broke out of the maximum-security Clinton Correctional Facility in Dannemora on June 6 using power tools and leaving behind dummies under bedcovers in their adjoining cells.

Until Saturday, the search was concentrated in a several-mile radius around the prison in the Adirondacks. Up to 800 law enforcement officers combed woods, went door-to-door and set up roadblocks.

After getting the call about the possible sighting Saturday, police interviewed the witness at length and decided she was credible and the tip bore investigating, Cerretto said. He said 300 officers were involved in the search in Friendship and neighboring Amity.

Authorities also said Friday that two men fitting the descriptions of Sweat and Matt had been seen a week ago in Steuben County, east of Allegany County. Two men were seen walking near a rail yard in Erwin on June 13, and then seen the next day in Lindley, heading toward the Pennsylvania border.

Investigators conducted interviews in both communities and sent surveillance video to Albany for further analysis. Cerretto wouldn’t say whether there had been any further reports of sightings Sunday.

Two railroads in the area, the Western New York & Pennsylvania and the Norfolk Southern, referred inquiries Sunday to the state police. Another, the Buffalo and Pittsburgh Railroad, hadn’t been contacted by authorities but had advised its employees to be extra-vigilant in looking for anything out of the ordinary, general manager J.L. Pope said.

If the two escapees are still roaming the woods together, that’s not surprising, said Patrick Patten, who trains law enforcers on woodland tracking and has been involved in high-profile manhunts including the search for Atlanta Olympics bomber Eric Rudolph. Patten said fugitives in the wilderness often stick together, unless they have pre-planned to split up and come back together at a camp or other hideaway.

State police asked residents who live around Friendship to be on alert, warning that the escapees are “very dangerous” and should not be approached.

“I was a little concerned. You have these guys running around. You don’t know where they are,” resident Darryl Ross told The Leader newspaper. “I have a house with a big cellar and a big garage. I cleared the house. I had firearm protection.”

Sweat, 35, was serving a life sentence without parole for killing a sheriff’s deputy. Matt, 48, was doing 25 years to life for the 1997 kidnap, torture and hacksaw dismemberment of his former boss.

Prison worker Joyce Mitchell remained in custody on charges she helped the two men escape by providing them hacksaw blades, chisels and other tools. She has pleaded not guilty.

Officials said a corrections officer also has been placed on administrative leave as part of the investigation into the men’s escape.