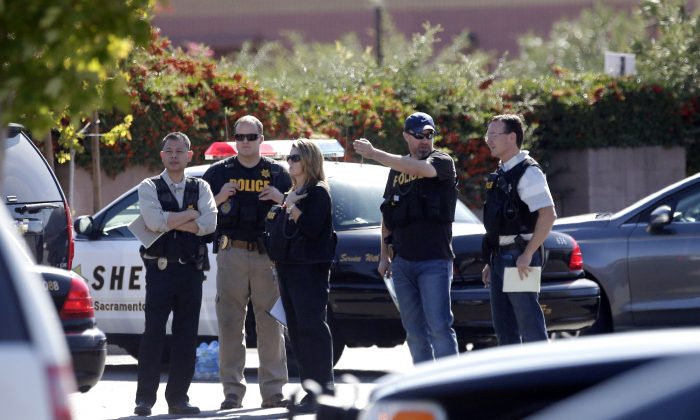 Law enforcement officers gather at the site where a Sacramento County Sheriff's deputy was shot by an assailant who then carjacked two vehicles prompting a manhunt in Sacramento, Calif., Friday, Oct. 24, 2014. (AP Photo/Rich Pedroncelli)
Crime and Incidents

SAVANNAH, Ga.—A man charged with killing a Georgia sheriff was back in custody hours after he slipped out of his leg shackles during a jail transfer, smashed a patrol car window and fled into the woods.

Authorities in Laurens County, about 100 miles west of Savannah, captured Jim Edward Lowery late Tuesday after he was spotted from the air inside a search area surrounded by law enforcement officers, Georgia Bureau of Investigation spokesman Scott Dutton said.

The manhunt lasted more than 10 hours and involved about 100 sheriff’s deputies and assisting officers from other agencies. But Lowery was apprehended peacefully, Dutton said.

“He was in close proximity to where they were looking for him,” he said. “He was captured without incident. Nobody was injured.”

Lowery had been jailed for months after being charged with felony murder in the death of Montgomery County Sheriff Ladson O’Connor, who crashed his patrol truck June 16 while helping deputies chase Lowery.

The prisoner escaped Tuesday morning just as a patrol car transferring him from the lockup in Treutlen County arrived at the jail in neighboring Laurens County.

Lowery managed to remove his leg shackles and use them to smash a window in the patrol car, the GBI said in a news release Tuesday evening. He fled on foot into nearby woods, eluding the Treutlen County deputy escorting him.

Though Lowery was wearing an orange jumpsuit and handcuffs when he fled, the GBI said, the handcuffs were later found lying in road.

“Right at the sheriff’s office, he was able to escape,” said GBI agent Lindsey Giddens. “They were in process of moving where he was being housed.”

Authorities did not immediately say Tuesday what additional charges Lowery might face for his escape.

The Georgia Sheriff’s Association has said O’Connor was the first Georgia sheriff killed in the line of duty in more than 20 years.

Authorities say the fatal June chase began when deputies assisting a motorist on the roadside noticed an approaching vehicle turn suddenly, as though the driver hoped to avoid being spotted. Lowery fled when the deputies tried to stop him and fired gunshots at three law officers during the chase, authorities have said.

O’Connor joined the pursuit when it crossed into Montgomery County. Deputies arrested Lowery after using spiked strips to deflate the tires of his vehicle. Also arrested and charged was Lowery’s passenger, Nicole Dixie Best.