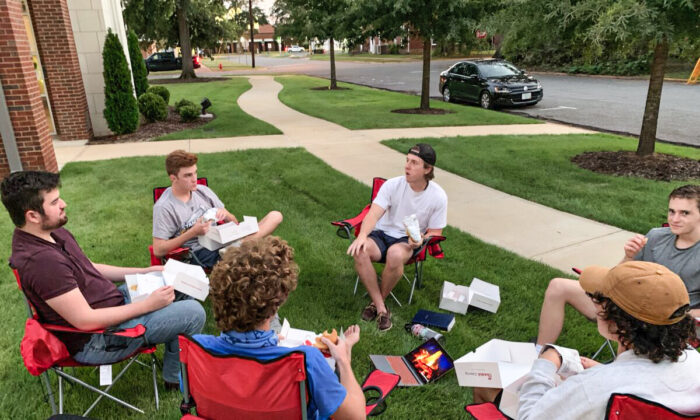 In his book The Boy Crisis, doctor of philosophy John Gray, says that males today face a quadruple threat of crises in education, mental health, fathering and purpose. File photo
US Features

When he was 11, Terrell Blue’s mom was in prison, his 3-year-old brother had just died, and his dad “was in and out of jail.”

Knowing he needed a role model, Blue’s aunt enrolled him in Big Brothers Big Sisters of America, one of the oldest and largest mentoring programs in the nation.

That was in 2010 and it took months for Blue and his Big Brother, 21-year-old Terence Daniels, to form a bond.

But, as Daniels consistently showed up each week, “we got closer and closer,” says Blue.

Over the next decade, Daniels, a former Little Brother himself, says he worked hard to “instill the right values and give Terrell options.”

When Blue joined the military, Daniels, who’d joined in 2009, offered support and advice.

When Daniels was named national Big Brother of the Year in 2017, the pair traveled to California together for the ceremony. When Blue suffered devastating family losses in 2018, Daniels was there to talk.

Now, at 23, Blue mentors his cousins, nephews, and nieces while working, attending college classes, and managing a new multi-family property he just bought.

“Terence will be forever a part of my life,” says 23-year-old Blue today. “Even though he’s my mentor, I always address him as my brother.”

For 15 years now, experts nationwide have been sounding alarm bells on a growing crisis: a lack of mentorship and purpose among boys and men.

“Anyone who has their eyes open can look around and say that men are confused about what it means to be a man,” says Jason Craig, founder of a Catholic male-mentorship/outdoor-adventure program called Fraternus.

Contributing factors include everything from absentee dads, to drugs and smartphones, but the end results remain the same: boys today are increasingly losing their way.

As with Blue and Daniels, the notion of “brotherhood” is a powerful draw for many boys and men.

Consider Rashid, a young man who dealt drugs and was struggling after his father was murdered.

Rashid was near dropping out of high school when he met Brandon, a counselor in a male-mentorship program called Becoming a Man (BAM), which launched in 2001 at Chicago’s Roberto Clemente High School.

“Brandon did what all BAM counselors do,” says BAM national director A.J. Watson in an April 2018 speech.

He “got to know Rashid, talked to him in the hallways and lunchroom, heard him tell stories about his pending court cases for drug dealing.

Brandon was persistent and just kept checking in with Rashid until he accepted the invitation to his first BAM circle.”

Seeing a group of guys his own age sharing their stories, Rashid “felt drawn to the space,” says Watson.

Supported by the “BAM brotherhood,” he accomplished both.

There are also boys like Lorenzo Cooper, a young man who entered Ashanti Branch’s Oakland, California-based Ever Forward Club at age 11. Branch, an engineer-turned-teacher in San Lorenzo, California, founded the male-mentoring program in 2004.

“My parents were so in their own world that I had to go three weeks with one outfit that I used to wash in the sink every single day,” says Cooper.

Thanks to Ever Forward, Cooper got the clothes he needed and more.

“Branch accepted me for who I was,” says Cooper, “no matter the dirt, the grimy.”

When Branch took Cooper and other teens on their first trip outside Oakland, they visited a college campus and spent time at the ocean, an experience that brought Cooper to tears.

“There’s not many other clubs tending to the emotional needs of students,” he says today.

Some boys, like James Johnson, need help forming a clear vision of what it means to be a successful man.

Johnson says he had “the privilege of being in the inaugural class of men of Men, Organized, Respectful, and Educated (MORE).

MORE is a district-wide Cincinnati public schools program, founded in 2008, that uses weekly meetings, community service, and other programming, to teach boys everything from social skills to conflict resolution, time management, and college readiness.

When he was asked to speak of his experience with the program, says Johnson by video stream, “I had to run and grab the tie that was given to us when we first started.”

“I keep this tie because of what it means—it was a great opportunity to be part of an organization that took so many first-generation individuals under their wings.

“I knew if you were part of MORE, you knew right from wrong, what success looked like. For many of us, we needed that inspiration—we needed to know that success was possible and obtainable.”

Other boys respond to programs that include an element of faith, like Focus Greek, a missionary-based Catholic outreach program for fraternity and sorority members at colleges nationwide. It includes Bible studies, community service, and mission trips.

“There isn’t a true grasp [today] of: What does it mean to be a man and to lead and to sacrifice?” says Connor McCauley, a University of Alabama Focus Greek campus missionary.

But one young man McCauley helped mentor noted that Focus Greek “taught me how to be a man and live in excellence.

“It taught me how to respect women and grow in faith; to give every moment and situation you’re in 100 percent, from the way you talk to a stranger or make your bed in the morning, to school. It also taught me how important community is.”

In a video on the Fraternus website, Ryan, one of the group’s “Captains,” describes how his own journey to manhood was closely intertwined with community and faith.

After a “life-changing injury,” he says, “I realized my whole life I wanted to be a real man, [but] I was never encouraged to look to Christ as the perfect model of manhood.”

Through his faith and participation in Fraternus—which includes mass, alongside pig roasts, tugs-of-war, rafting, and bonfires—he became friends with like-minded men and learned that “real manhood” involves “using the strength God has given you by receiving his love and giving that strength as a gift to the world.”

Trail Life also offers boys the opportunity to grow in faith with a side of adventure.

It was launched in 2013 after CEO Mark Hancock and 50 others noticed “the Boy Scouts were abandoning some of their more traditional values.”

Trail Life is a church-and-values-based “boy-focused mentoring and discipleship journey” that includes service, outdoor activities, and “summer adventures.” The boys’ age range is from kindergarten through 12th grade.

One of Hancock’s favorite success stories is of a North Carolina boy, who joined the program after his father was “removed from the household suddenly.”

After the young man’s first 15-mile hike with Trail Life, he told Hancock: “The first day, I was so sore. The second day, I thought I was gonna die. The fourth day, I stood on that summit and realized I can do difficult things.”

The boy’s mom called that experience “pure gold,” says Hancock, noting it taught her son that “there are hard things [in life] that you get through if you don’t quit.”

Ultimately, says BAM’s AJ Watson, “the right intervention, at the right time, in the right place, by the right people, can have a transformative impact” on boys and young men.

Maybe most important of all, he adds, is understanding that “it is not too late for Rashid, or the young men in Chicago, or Boston, or of this country.”

They just need the chance to grow and someone to guide the way.