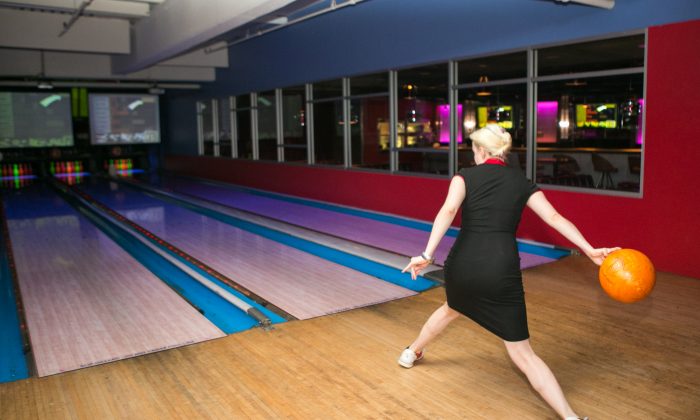 Staff members of Bowlmor Lanes in New York’s oldest bowling center, play a game on the last day that venue will be open, in Manhattan, on July 7, 2014. (Benjamin Chasteen/Epoch Times)
New York

Most customers who arrived at Bowlmor Lanes at Union Square Monday morning did not know the 76-year-old bowling alley would be closing for good.

“I can’t believe it,” said Carlos Torres, who was there to celebrate his nephew’s birthday with family members. Torres had been going there since he was 12, “which was a long time ago,” he said.

Torres, who is from the Lower East Side, admitted it was a sad coincidence that his nephew’s first time bowling there would be his last. “But as they say, if you go, you’ve got to go out with a bang,” he joked.

Bowlmor Lanes, which opened in 1938, once hosted the first televised bowling tournaments in the country and included then-Vice President Richard Nixon among its many famous patrons. Autographed pins from recent celebrity bowlers lined the walls, including comedian Jimmy Fallon and fashion designer Michael Kors.

The building’s new owners plan to demolish the site and build luxury condos in its place, according to General Manager Chloe Leverone.

The day also happened to be Leverone’s birthday; she turned 26. “It’s bittersweet,” Leverone said of her feelings that day. “This is the first location for the company and it’s thought of as its heart and soul.”

Having worked here for more than seven years, starting from the front desk, Leverone said, “I’ll take away the relationships and the people I’ve been able to meet.”

In 1997, the company’s current CEO and president, Tom Shannon, bought the business and revamped the venue. He later opened new bowling alleys in California, Maryland, and Florida, among other states. In 2013, Bowlmor merged with bowling center operator, AMF Bowling Worldwide Inc. to become Bowlmor AMF.

Leverone recalls many patrons who came every week and neighborhood locals celebrating their birthdays and holding company gatherings. When news of Bowlmor’s closing spread, many of them called to inquire.

“It’s one more New York institution closing due to real estate development,” said Andres Restrepo, district manager. He recalls grandparents who used to be in bowling leagues bringing their grandchildren to bowl at Bowlmor.

Some maintenance and facility workers have been working here for over 25 years, Restrepo said. While the company plans to relocate as many employees as possible to Bowlmor AMF’s other locations in New York, some may not be able to keep their jobs.

Though the Bowlmor in Union Square will be closing, the company plans to keep its scoring machines, alley lanes, and bar counter for a newly conceived vintage theme in their Texas locations, called “Bowlero,” which they hope to eventually expand to other major cities.

Restrepo will miss the youthful vibe at Bowlmor. “There would be six, 700 people here on a Saturday night. You come into the building and it’s an electric feeling, oozing with energy,” he said.

Schoolmates Daniel Samoon and Sarah Acocelli, both 12, were playing rounds together early Monday evening—neither knew about the closing.

Daniel, who attends school three blocks away, came regularly throughout the school year to bowl with friends after school. About the imminent closing, he said, “It’s kind of sad. It brings back memories with friends, and now we have to find another place to bowl, and there’s not very many places around here,” he said.

Sarah remembers coming here for her friends’ birthday parties and her own. “It’s a big part of my childhood,” she said. “It’s like a part of my life is closing.”

CORRECTION: A previous version of this article misspelled the name of Bowlmor AMF. Epoch Times regrets the errors.