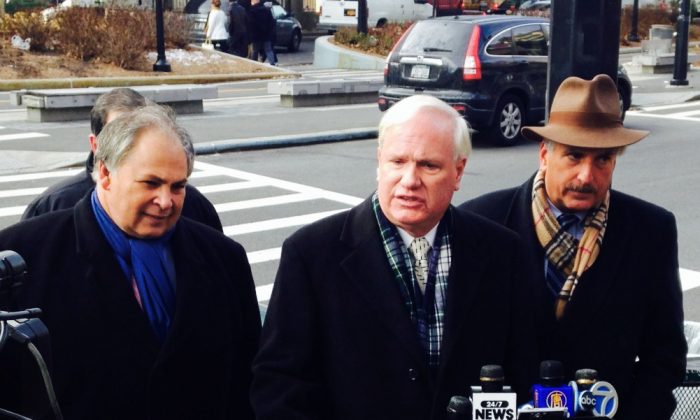 Manhattan’s Free Bridges: To Toll or Not to Toll

Not so, according state Sen. Tony Avella—and not at the cost of burdening local families and businesses. To counter Schwartz’s plan, Avella and Assemblyman David Weprin drafted legislation that would prohibit tolls on bridges that cross the East River to Manhattan: Queensboro Bridge, Williamsburg Bridge, Manhattan Bridge, and Brooklyn Bridge.

“In my opinion, it is discriminatory to charge people to go from one part of the city to the other,” said Avella in freezing weather at Queens Plaza beneath the Queensboro Bridge on Dec. 13.

Schwartz released his plan, More Equitable Transportation Formula for NY Metro Area, in March. It calls for a drastic overhaul of the city’s current toll system. The plan proposes that free East River bridges get a toll of $5 for E-ZPass users and $7 for cash paying drivers. At the same time, tolls for bridges that don’t directly link to the Manhattan central business district, such as the Triborough Bridge, the Whitestone Bridge, or the Verrazano Bridge, would be cut by almost half.

According to Move NY, an organization promoting Schwartz’s plan, the $1.5 billion generated through the tolls will be used to improve mass transit, roads, and bridges to benefit both commuters and motorists. The plan would create approximately 35,000 new jobs and ease congestion in neighborhoods near the free bridges.

“We toll practically every single other crossing between every other borough in the five boroughs of New York City already. So why is it sacrosanct to these four facilities?” said Alex Matthiessen, director of Move NY. “We’re just asking everybody to pay their fair share and in doing so we can raise the kind of revenue that will allow us to invest into our mass transit system and create the kind of transit service that everybody can enjoy and benefit from.”

But Avella and Weprin say there are other ways to raise funds to upgrade the city’s transportation infrastructure. Weprin suggests a 1 percent commuter tax, which will amount to $1 billion per year to be split between the Metropolitan Transportation Authority and the city.

“I know my colleagues in government. The minute that plan will go into effect, those half fares on the other bridges would start to go up,” said Avella.

Avella also said that the implementation of the plan will do little to reduce congestion and will only add a burden to working families and local businesses who rely heavily on their cars, especially to those who need to travel frequently between Manhattan and the outer boroughs.

“There are places in Queens and neighborhoods in Queens, especially the districts that we represent, where you need a car to get around. And I said years ago and I say it again, nobody drives into Manhattan for the pleasure of it, people drive in because they have to,” said Avella. “Imposing tolls on the East River bridges is just one more unfair burden on people who can least afford it.”

Thus far, both sides have supporters. However, even if change happens, it won’t come right away. In order for the new tolling system to be put in place, the city must get behind it and the plan must be approved by Albany. Mayor-elect Bill de Blasio did not show support for the plan, and Gov. Andrew Cuomo said that he doesn’t believe the plan will pass.