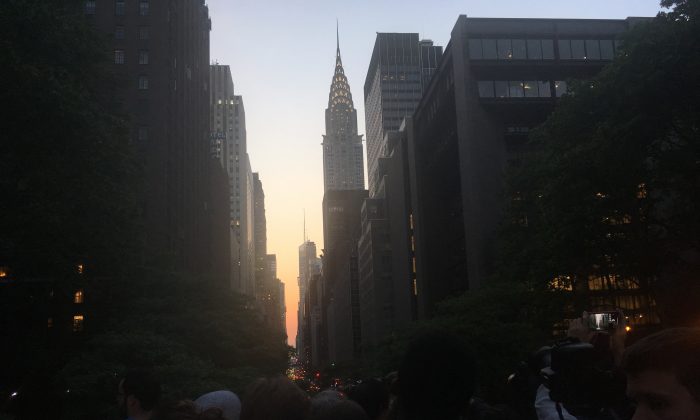 New Yorkers gather to view Manhattanhenge from 42nd Street on May 29, 2018. (The Epoch Times)
NY News

‘Manhattanhenge’ to Return to New York City This Week

The brilliant phenomena that has come to be known as “Manhattanhenge” is returning for a second round later this week.

The term “Manhattanhenge,” coined by astrophysicist Neil deGrasse Tyson, signifies its similarity to Stonehenge, where the setting sun aligns perfectly between the prehistoric structures as it sets during the summer solstice.

On May 29 and 30, thousands gathered in the streets to catch a glimpse of the celestial phenomena on everything from cellphone cameras to the newest DSLRs.

Serious photographers are advised to scope out a spot and arrive early, as Manhattanhenge draws a crowd.

The best streets are those that are straight, so staying above 14th Street is advised. Wider streets will give the clearest views, such as 14th, 23rd, 34th, 42nd, and 57th streets.