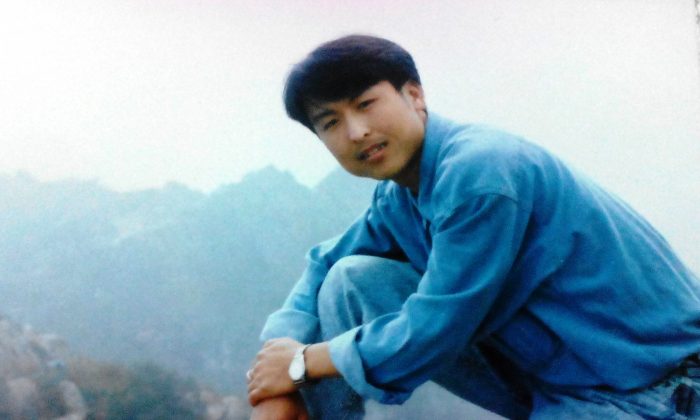 Tian Yunhai, who has been illegally imprisoned for 10 years in China because of his beliefs. (Courtesy of Pan Qi)
China

After serving nine and one-half years in a Chinese prison for remaining true to his beliefs, a former railway manager may now face even more time in one of China’s nightmarish extra-legal detention centers. His fiancée is working to gain his release.

Tian Yunhai was sentenced to 10 years in prison in 2005 because of his practice of the spiritual discipline Falun Gong, also known as Falun Dafa. His fiancée, Pan Qi, is a Chinese physician who came to the United States in 2009 by way of Thailand, where she had sought U.N. protection as a refugee. Like Tian, she is also a practitioner of Falun Gong.

“Usually a person is released from prison about 6 months before the conclusion of the prison term,” said Pan. “Tian’s father went to the prison to pick up his son on Dec. 21, but was told that his son could not be released because he had refused to abandon his beliefs.”

“Tian’s father was told that even if his son were to be released on June 30 next year, someone else, not the family, might be there to pick him up,” said Pan.

“I am afraid that Tian will be taken to a brainwashing center or black jail after his scheduled release,” added Pan.

Tian began practicing Falun Gong in 1995 when he was a college student at the Shijiazhuang Railway Institute. In 1999, after graduating from college, Tian started working at the 13th Bureau of Dalian Railway, and his job performance earned him the position of a manger. His future looked bright.

Things changed on July 20, 1999, when the then-head of the Chinese Communist Party, Jiang Zemin, launched a campaign to eradicate the practice of Falun Gong. In a letter he had earlier sent to the CCP’s Politburo, Jiang complained about how many people were practicing Falun Gong—in 1999 media reports estimated that 100 million Chinese had taken up Falun Gong, a number greater than the membership of the CCP.

Jiang noted that those practicing Falun Gong included Party members and individuals in the security forces. And he expressed concern that the traditional moral teachings of the discipline would prove more attractive than the CCP’s.

Tian did not accept the persecution and in 1999 traveled from Dalian in northeastern China to Beijing to attempt to tell Chinese officials they had made a mistake in persecuting Falun Gong. He was detained in the notorious Masanjia Forced Labor Camp and lost his job when his supervisors forced him to resign.

In July 2005, domestic security officials broke into Tian’s home and confiscated everything. Someone had reported on him for practicing Falun Gong. Without a public hearing, Tian was sentenced to 10 years in prison on a charge of “interference with law enforcement” and is currently detained at Shenyang Prison in northeastern Liaoning Province.

According to Pan, domestic security officials such as those who abducted Tian are like thugs. They have no uniforms and act without any basis in the law.

“In 2006, Tian’s father and I went to see him in prison, but he was shaking terribly while being carried forth by guards,” said Pan. “Tian told us that whatever might happen to him, the prison is at fault and it has nothing to do with him committing suicide.”

According to Pan, many Falun Gong practitioners have died while in prison and their families sometimes don’t know exactly what has happened. The prisons regularly claim the practitioners committed suicide.

According to the Falun Gong website Minghui, which is a clearinghouse for first-person reports on the persecution, Tian had stopped guards from beating other practitioners. In retaliation, the guards had then tortured Tian.

A letter from Tian later revealed that prior to the visit by Pan and his father, he had suffered terrible torture, including sleep deprivation, wearing very little during cold weather, not being allowed to speak, being beaten and humiliated by other inmates, a limited use of the toilet, and being handcuffed for 24 hours straight.

Pan herself started practicing Falun Gong in 1996 when she was a student at the Dalian Medical University. The practice was very popular at the school campus because of its remarkable health benefits.

“I remember back in 1993, when I was helping out at my school’s hospital, a woman was sent home by the doctor since there was no chance of her recovering from lung cancer,” said Pan. “I was stunned when I saw her again, as X-rays showed the her lungs were free of cancer.”

“My older sister, suffering from intervertebral disc protrusion, could walk two weeks after she began reading Zhuan Falun,” said Pan, which eventually inspired her to start the practice as well. Zhuan Falun is the foundational text of Falun Gong.

Pan said she had also been detained five times while she was in China and the persecution she had endured including being forced fed, which was carried out by a doctor who had graduated from the same medical university as Pan. Minghui has reported more practitioners’ deaths from force-feeding than from any other torture.

When asked why a doctor in China would take on such a horrifying job, Pan said, “It is one-party rule in China, and you grow up accustomed doing whatever the Party tells you to do.”

“If you disobey what the Party tells you to do, you would run the risk of getting a smaller paycheck, losing your job, and becoming the target of attack by others—so people would do things even if they know they are wrong, or simply becoming like a machine,” said Pan.

Pan’s entire family is struggling financially because both she and her older sisters practice Falun Gong. Once her parents opened up an Internet cafe, but were forced to give the business up because of constant harassment from security officials.

In spite of the hardships, Pan said she has spent a great deal of money trying to rescue Tian, as well as providing assistance to other illegally imprisoned Falun Gong practitioners.

“Once a security official sarcastically told me my sister and I were very lucky—for being still alive,” said Pan.

“I hope Tian will remain strong until the very end. Justice will eventually prevail over evil,” said Pan. “There are many Falun Dafa practitioners in China, who are in a similar position as Tian. I hope telling his story can reduce the severity of the persecution others suffer.”