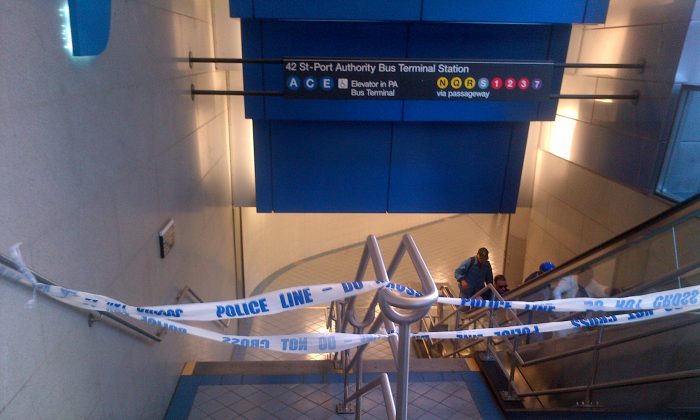 Manhattan: ‘All Clear’ After Reports of Grenade at Times Square Subway Station

'All clear' given after about an hour
By Zachary Stieber

The NYPD received reports on Monday of a suspicious package in the Times Square subway station, and that the package looked like a grenade.

The MTA said at about 1:40 p.m. that due to NYPD activity at 42 Street, A, C, and E trains were bypassing 42 Street in both directions. However, about an hour later, the MTA said that “following an earlier incident” train service has resumed, with residual delays.

The part of the Times Square Station at West 42 Street and Eighth Avenue was evacuated and blocked off.

Epoch Times journalist Petr Savb reports that there was little going on above ground to indicate the activity underground.

Patrick Manning, a reporter with Fox, said that the NYPD “got a call saying an item that looks like a grenade was found inside Times Sq subway station.”

He said that the item was on the north-bound track.

A law enforcement official told Shimon Prokupecz of NBC that the suspicious object was actually a Chinese lantern.

One Twitter user, Alissa Nichole, said earlier that she was in the station and that “people are standing around, looking all confused.”

“I got out of there and took the bus,” she said. “I don’t understand people.”

Leah Jane Kugler said via Twitter: “Was wondering why a million cops kicked my out of the subway until I read on Twitter that there is a grenade down there. PERFECT.”

The NYPD didn’t answer a call to its media office.