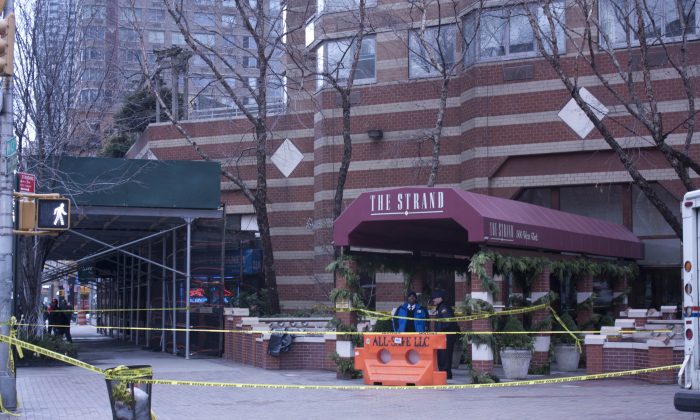 NEW YORK—Just one day after a three-alarm fire in a 41-story Manhattan high-rise caused one death and one serious injury, evidence of the tragedy on the street and around the building had been virtually wiped clean—though the building remains scarred black from smoke and flames.

The accidental fire at 43rd Street and 10th Avenue was started by a faulty electrical wire on the 20th floor at about 11 a.m. Sunday, Jan. 5.

By 3 p.m. Monday, the main evidence of the fire was between several south-facing windows spanning the 20th to the 27th floors of the building, called The Strand. Blackened holes stared out at the winter sky, as workers with Site Safety LLC installed plywood boards where plate glass windows used to be. It wasn’t clear whether the glass broke from the heat of the fire or was intentionally broken by building residents trying to ventilate the smoke.

Far below the windows, Happy Family Chinese Restaurant owner Botao Han said the sidewalk was covered with glass until mid-afternoon Monday. Han had just opened for the day when the fire started. He and his employees were told to stay inside during the fire. Still they saw a huge commotion on the sidewalk as several hundred people gathered to watch.

“We just stayed inside—they closed the street,” Han said. “I was worried about my business.”

Han and several other businesses on the block are connected to The Strand as part of one building. He added that now he’s concerned about the possible impact to his insurance costs.

Residents appeared to still be shaken as the last bits of glass were swept up and the web of yellow police tape was taken down. George Hahn, who lives on the sixth floor, said he got out relatively easily, but that “it was scary.”

Many residents on higher floors were instructed to stay in their homes during the fire, including one man who live-tweeted about the fire and took pictures from a higher vantage point as he waited with his wife and 2-year-old child.

Farther below on Hahn’s floor, he said he smelled smoke and heard the fire alarm and orders to evacuate.

“I heard someone yell, ‘Everyone get out of the building!’” Hahn said Monday as he stepped out to walk his dog.

According to a representative for the New York Fire Department, 33 units responded to the fire and were on the scene shortly after noon. Five firefighters suffered minor injuries, and 10 residents suffered minor injuries and refused medical treatment. Two building residents with critical injuries were taken to separate New York hospitals, and one of them, 27-year-old Daniel McClung, died later.