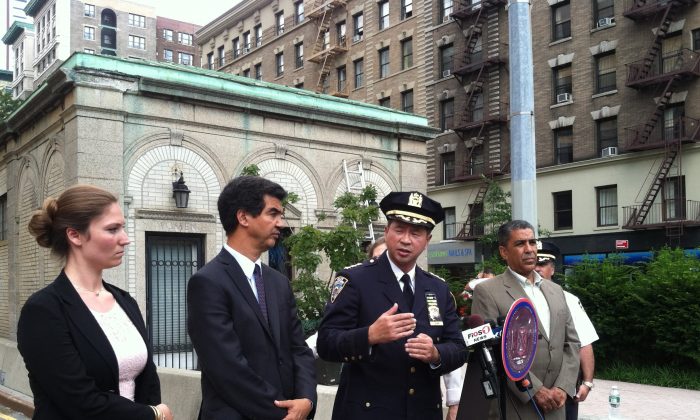 Instead of the previous 30 miles per hour, drivers traveling on Broadway from 59th Street to 220th Street will now be required to drive a maximum of 25 miles per hour. Along this section of Broadway, 22 people have been killed since 2008.

The city has established slow zones in other accident-prone intersections, such as along the Grand Concourse in the Bronx and Atlantic Avenue in Brooklyn. The city plans to create 25 slow zones in total.

At a press conference Monday, the New York police department transportation chief, Thomas Chan said officers in local and borough precincts will be in charge of enforcing the new speed limit, using radar guns and ticketing drivers who violate traffic rules, but he did not provide further details on how police enforcement will be carried out.

A request for comment into how many officers will be trained in using the radar guns or deployed to enforce the new speed limit was unreturned at press time.

Chan said compared to the same period last year, the police department has increased the number of speeding summonses issued by 67 percent, and tickets for not yielding to pedestrians by 150 percent.

At the location of the press conference, where there have been four traffic deaths within a two-block radius this year, about a dozen traffic agents, community affairs officers, and police officers were stationed at the intersection near a subway entrance.

Some were directing pedestrians, while others were seen chatting with each other and passersby. But by 3:10 p.m., the officers had left the area, leaving just one traffic agent to direct traffic. None of them were seen with radar guns in hand.

New signs indicating the reduced speed limit were displayed on 96th and 97th streets, visible to vehicles going both southbound and northbound.

Local Council member Helen Rosenthal said at the press conference that a slow zone will be created for Amsterdam Avenue as well, though she said it was yet unclear which stretch of the avenue will be considered.

The 25-mile-per-hour limit may soon become the norm across the city. In June, the New York State Senate and Assembly passed a bill that will allow the city to lower the speed limit.

The legislation is awaiting Gov. Andrew Cuomo’s approval. Albany also recently authorized the use of 120 speed cameras around city school zones during school hours, but Rosenthal said she hopes to request more cameras that will record speeding drivers at all hours.