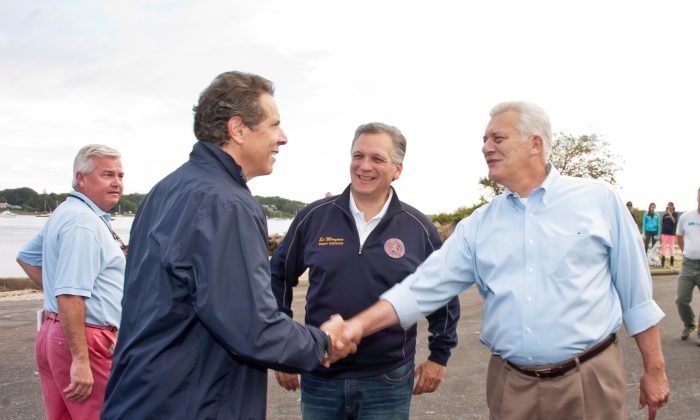 As the election campaign moved from the summer to the early fall, most political professionals, studying polls and questioning potential voters, predicted incumbent Ed Mangano would defeat challenger and former two-term incumbent Tom Suozzi in November’s election for Nassau County executive. The predictions largely were that Mangano, who defeated Suozzi four years by only several hundred votes, would win by a more comfortable margin this time—but not by the 59 percent to 41 percent landslide that would occur. The question asked by some stunned Democrats and more than a few overjoyed Republican activists was, “How did this happen?” The answer, I believe, is quite simple.

Mangano used an unbeatable formula to achieve his landslide victory. To start, with he kept the campaign promise he made four years ago not to raise taxes. And his campaign slogan—“Thanks Ed for not raising taxes”—resonated with the voters simply because it reflected that truth. And Mangano also communicated to his constituents the past four years that he was unafraid to take on powerful special interests.

As just one example, when Mangano last year transformed four police precincts into police centers, he was slammed by the Nassau County Police Benevolent Association and some local homeowners, who predicted crime would soar. Mangano stuck to his guns. Rather than go up, crime went further down. And just as Mangano had predicted, the county saved millions of dollars in expenditures. Such successes were not lost on the voters.

Mangano’s relationship with the election’s other big winner incumbent Comptroller George Maragos (who, by a 6 percent margin, defeated Howard Weitzman, the former two-term incumbent he had beaten by just several hundred votes four years ago) proved to be mutually beneficial. Several Democrats I spoke with in the weeks prior to the election privately told me that they feared the ads showing the two of them together citing their success at holding the property tax rate would prove difficult to counter. These fears proved to come true.

I was also told by both Democrat and Republican insiders that Mangano became very good at retail politics, even better than he had been four years before. He seemed relaxed and friendly, and easily bonded with voters as he campaigned throughout the county, my sources told me. These comments did not surprise me; this was the same Ed Mangano I had interviewed in his office this past February.

And then, of course, voters watched those television commercials, hearing Democrat Gov. Andrew Cuomo of all people praising Mangano’s courage and leadership. While the commercial captured Cuomo praising Mangano a year before the actual election cycle had begun and in the end Cuomo formally endorsed Suozzi, the governor’s comments apparently still had an impact on Cuomo-friendly voters.

But Cuomo’s praise of Mangano might come back to haunt the governor when he comes up for re-election next year. Since election night, I have spoken with several Republican leaders who told me they believe that based on his landslide victory, the best candidate for the Republican Party to run against the incumbent would be none other than Ed Mangano.

Robert Golomb is a nationally published columnist (MrBob347@aol.com). He writes on a range of educational, cultural, and political topics.